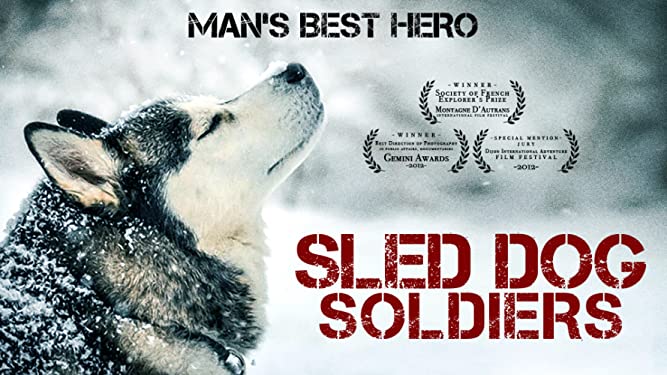 Hear Ye! Hear Ye! Read all about it! (As you can see, I have too much time on my hands.)

After The Call of the Wild, another dog movie is downright irresistible. Interestingly, Sled Dog Soldiers (Amazon Prime) is a documentary with a direct connection to the Jack London book. More on that in a minute. It’s World War I and the French can’t keep their troops supplied and their wounded evacuated during the winter of 1914-15. The Vosges, described as low mountains, become impassible for horses. If the French cannot hold these outposts on their Eastern border, the Germans will pour in.

The war is in its early stages, so all ideas are put on the table. For two French officers familiar with Alaska, Nome sled dogs are the answer. Under strict secrecy, they act under orders to bring back 400 dogs. What could go wrong? Almost September before they arrive on the east coast, winter will soon arrive. I give Sled Dog Soldiers 3.5 Gavels and it receives an 8.6 IMDb rating.

Captain Moufflet and Lt. Haas quickly determine that the Americans will not help locating and shipping dogs. Still neutral, no company wants to risk the German U-Boats. The Canadians, allied with the French, are sympathetic. Haas knows Scotty Allan, the most famous musher of his day, very well from his days during the Alaskan Gold Rush. Helpful as ever, the Nome newspaper prints the story that these two seek sled dogs to take to France for the war effort. The story quickly spreads to The New York Times and German spies. As I said, what could go wrong?

Unable to Google any information about this movie, the actors are unknown. Moufflet and Haas are the key characters, given $18,333.00 to accomplish their task. Without Allan, their success is doubtful. He won the All Alaska Sweepstakes race (408 miles) four times. It is Scotty Allan that Jack London bases his book upon.

How successful are the dogs? During one siege, they deliver 90 tons of ammo during a four day blizzard. The French are so pleased that the dogs are awarded the Croix de Guerre for heroic deeds involving combat with the enemy. But, Sled Dog Soldiers is not a “war” movie so much as it is a “procurement” movie. Given 120 days to accomplish the task, Moufflet and Haas faced obstacle after obstacle, not including the sheer distances at hand. At a short 52 minutes, the documentary outlines more history about a war we already know too little about. Moreover, these Huskies are beautiful animals, even as described “half-wild.” Overall, Sled Dog Soldiers is a nice diversion from the ordinary fare. Mush!