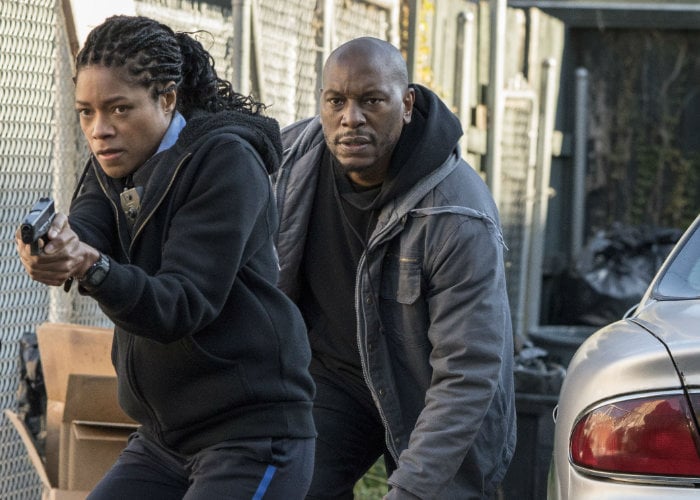 Is police corruption a genre? If so, after watching hundreds of the type, it would be one of my least favorites. Still, Black and Blue adds a twist, i.e., the good gal officer is black in addition to being blue. Yet doesn’t it seem simplistic to suggest that she must somehow choose, that they are mutually exclusive. Black and Blue takes good actors and puts them in a low budget movie with bottom of the barrel writers. It’s no better than a decent TV movie. I give it 2.5 Gavels and agree with the 49% Rotten Tomatoes rating. The likable actors account for the 94% Audience score.

Officer West hears gunshots and enters an abandoned warehouse to find a narc officer murdering an unarmed man, the nephew of the local drug lord. West is wearing a camera which records the crime. At all costs, the camera must be destroyed and West eliminated. Told that West is the perpetrator, both the police department and the drug lord want her. Unable to trust her fellow officers, West has few options.

Naomi Harris, nominated for an academy award in Moonlight, stars as Alicia West. Hopefully, she will get more chances to carry a film. Tyrese Gibson is convincing as her only “friend.” Mike Colter is less so as the drug lord. Whoever put him in gold teeth needs to be retired. Finally, is Frank Grillo ever cast as anyone other than a bad cop?

Is it obligatory that every Hollywood film wounds the lead character in some serious fashion, then before the day is up, that same hero/heroine bashes the bad guy as if the injury magically healed? Moreover, it seems that all cops are racist and all drug dealers wear fur. Isn’t PETA offended? Throwing in a #Black Lives Matter scene and references to FEMA and Katrina just seems like the kitchen sink thrown in for good measure although it does nothing to advance the plot. Bottom line–Black and Blue won’t leave you battered and bruised, but not likely to heal your soul either.