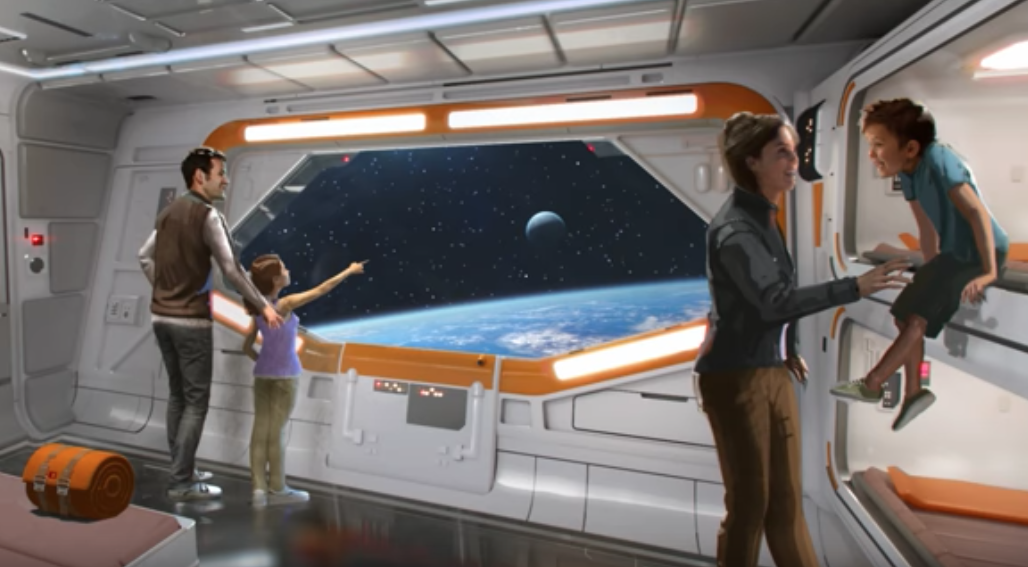 So, you love Star Wars, and you want the complete, immersive experience. Disney will “give” it to you, but it won’t be cheap. At Galaxy’s Edge in Disney World, they are planning a hotel where the rooms will be modeled after the cabins on a Galactic Starcruiser. Instead of windows, screens will depict outer space. Alien crewmembers will assist you; timed events will entertain you. The projected cost? $1400 per person per night. Any good news? You are limited to a two night stay. Can’t have any of the of the travelers getting space-sick. I wonder if there will be a bankruptcy kiosk.

Just when you think you have seen everything, along comes Tank Girl. Born of the punk rock culture, this comic book character, Rebecca Buck, drives, and lives, in a tank. Set in futuristic Australia, she is an outlaw “prone to random acts of sex and violence, hair dyeing, flatulence, nose-picking, vomiting, spitting, and more than occasional drunkenness.” Since she looks like a close cousin to Harley Quinn, perhaps that is why Margot Robbie picked up the rights. In 1995, the Tank Girl movie earned a terrible 38% Rotten Tomatoes rating; the trailer is awful. Any socially redeeming value? An evil corporation controls all water supply. Tank Girl and her friends risk their lives to steal it for the common man. Sounds like Robin Hood!

Remember when you said you would never pay for bottled water?

Some day, kids will never know that TV was once free. On November 1, for just $4.99/month, Apple TV+ will entertain you with the likes of See starring Jason Momoa and Alfre Woodard. In the future, all have lost sight and we are hunter/gatherers. But, when Momoa’s twins are born with sight, he must protect them from the Queen. She believes those with sight will doom the remaining human race. Writers must be a pessimistic lot. Ever notice how the future is always bleak?

Credit cards maxed out yet?

And, on November 12, feel free to subscribe to Disney Plus, at a mere $6.99 per month. They will entice you with Hawkeye, starring Hailee Steinfeld and Jeremy Renner. Young Kate Bishop is brutally attacked, then spurred on to intense physical training. Clint Barton trains her in the art of archery. She will become one of the Young Avengers and take the name of Hawkeye like her mentor. If Marvel and Disney are behind it, it’s likely to be more must-see TV.

Now, That is BAAAAD!

Why do they let Michael Bay blow things up? Bad Boys (1995) made $141 million on a $19 million budget. Bad Boys II (2003) followed up with $273 million on a $130 million budget. On January 17, 2020 you get to see Will Smith and Martin Lawrence blow up more stuff in Bad Boys For Life. Even better, Joe Pantoliano drinks lots of Pepto-Bismol as he tries to corral his wayward officers. Add to that a Romanian mob boss who wants revenge. Sorry, no Michael Bay on this one. Budget constraints kept him from blowing up as much stuff as he wanted. 🙁

On Christmas Day, you can follow the true story of Bryan Stevenson and Walter McMillan in Just Mercy. Michael Jordan plays a young, Harvard-trained lawyer founding the Equal Justice Initiative in Alabama. Jamie Foxx is on death row, convicted on the testimony of one man, despite dozens of alibi witnesses, including a police officer. Currently holding an 85% Rotten Tomatoes rating, Brie Larson co-stars.

Just how safe is it?

By now, you probably recognize that I end each “Coffee” with a business/legal angle. I haven’t seen a Resident Evil movie, nor do I so intend. However, a lawsuit by a stunt double of Milla Jovovich caught my attention. It seems she thought she was doing a “fight scene” which turned into a motorcycle scene in adverse weather. As she sped toward to camera, the crane did not lift and she lost her left arm, cheek sliced open to her teeth and placed in a medically-induced coma. Further, another crewmember was killed on the same movie and sixteen were injured in a prior installment. Told that she had insurance, and told that the producers would pay her medical expenses, neither came to pass. Recognizing that these are only allegations, did the producers “elevate financial considerations over safety?” Interestingly, Screen Rant has a 2017 article “15 Times Stunt Men were Seriously Injured (Or Died) On Set.” Or, as Willie Nelson and Waylon Jennings might sing, “Mamas’ don’t let your babies grow up to be stuntmen.”