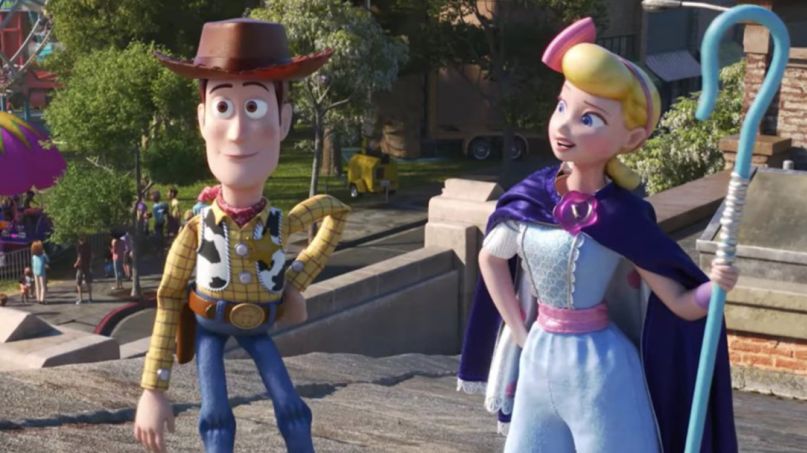 Although Woody and Bo are the stars, a spork will steal your heart. For those who say Toy Story 3 had the perfect ending to this franchise, and now contend that Toy Story 4 presents an even better conclusion, they are idiots! As long as Pixar can deliver stories like these, expect Toy Story 5. How often does a sequel get a 97% Rotten Tomatoes rating with a 96% Audience score? How often does an animated movie recover its production costs in the first weekend in the US alone? Even though Tom Hanks and Tim Allen think they are done, don’t believe it! Not when TMJ gives it 4.5 Gavels. You, and your kids, will love it!

To the tune of “You’ve Got A Friend In Me,” Woody will not tolerate any toy left behind. Nine years ago, Bo Peep is purchased, and Woody risks his existence to save her. Torn between Andy and Bo, she convinces Woody that it is time to let go. Today, Bonnie doesn’t want to go to kindergarten. Her parents will not let her take a companion toy to ease the transition. Woody, now neglected, sneaks into her backpack to help her, as he once helped Andy. When Bonnie is ignored by everyone, and on the verge of tears, Woody provides her a spork and other materials. Thus, Forky, her favorite toy is born. But, what if Forky doesn’t want to be a toy?

Woody. But, Woody has a crush on Bo. What happens when they are reunited? Will sparks fly? Bo Peep is voiced by Annie Potts. Her battle with Gabby Gabby (Christina Hendricks) is central to the story. As comforting as Tom Hanks is, Hendricks is as discomfiting. Tim Allen is back as Buzz Lightyear, but his part is significantly diminished.

As always, you will see no finer animation than in a Pixar movie. The screen immediately brightens your mood. Forky’s unending attempts to throw himself into the trash continue to hit the funny bone. Likewise, Woody’s life-saving tactics to the tune of “I Can’t Let You Throw Yourself Away” are hilarious. New characters Ducky and Bunny get their share of laughs, especially as they plot to steal keys from an elderly, female shopkeeper. So, what happens when a child outgrows a toy? You thought you had the answer in Toy Story 3. Toy Story 4 proves you have a lot to learn about toys, much to the viewers’ delight.