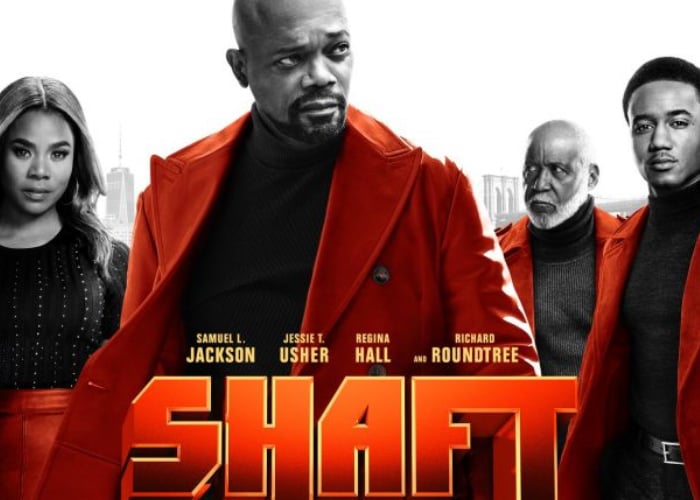 Misogynistic and uneven, it is difficult to imagine this Shaft being made in 2019. Yes, John Shaft II grew up in Harlem, in a different time, but the movie feels like it was written by male teenagers in a locker room. As the critic for The New York Times notes, it’s difficult to know whether this is an “affectionate throwback or a cringe-worthy anachronism.” Be prepared for testosterone-laden jokes, and lots of them. The stereotypes in the original Shaft (1971) still dwell in this version. Yet, if you get past all that, the Audience score of 95% shows it has a market. I give Shaft 2.5 Gavels and it receives a Rotten Tomatoes rating of only 33%.

Maya takes John Jr (aka JJ). from Harlem as a baby after they are caught in a drug shootout with John II. Twenty five years later, JJ, now an FBI analyst needs his father’s help to find out who killed his best friend. JJ despises guns and is entirely out of place in Harlem, just the opposite of his dad. Repulsed by his father’s violent tactics, JJ recognizes their effectiveness. And, John II seems to have a way with the ladies that also catches JJ’s attention. But, can the father learn anything from the son?

Samuel L. Jackson is John Shaft II, mouthy, irreverent, overconfident, and a ladykiller, just like his old man, John Shaft. In a stroke of genius, who else could that be but Richard Roundtree. Welcome back to your iconic role. However, Jessie Usher is badly miscast as JJ, especially if they are trying to revive this franchise. He just doesn’t have the chops. Regina Hall has a small part as Maya, JJ’s mother, but looked uncomfortable with some of the dialogue dredged up from the ’70’s. Likewise, Alexandra Shipp fails to pass the believability test as the plot forces her to go gaga over her man killing bad guys.

How will this male-centric film do? Those who do this sort of thing guess that this $35 million movie will return $20 million this weekend. If women see their counterparts being treated as sex objects as a spoof or parody, then Shaft might have legs. If they see this as more of what led to the #metoo movement, it could become toxic. The legs, shapely or not, will be cut off. It’s easy to see why the critics struggle with this one. But, even The Movie Mom admits “there are moments when it is an entertaining popcorn movie with appealing performances.” In any case, it would be best not to take a first date to see this one.