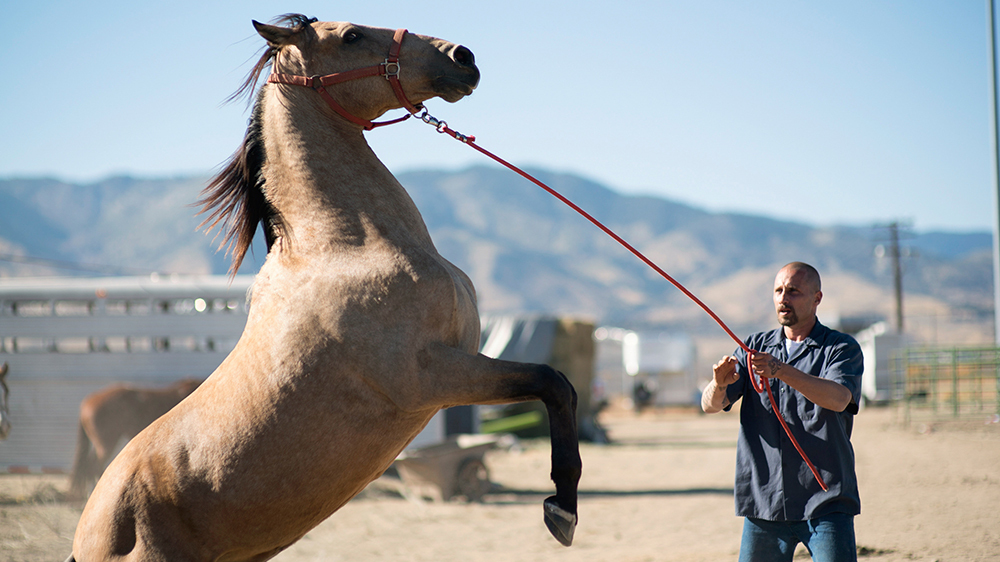 Sometimes I wonder if critics have ever been closer to a horse than their TV screen. While The Mustang is a solid movie about a bond between man and animal, this one breaks no new ground. Confusing, too, is the message. At the beginning, we are told that only 100,000 of these wild animals still remain. The Bureau of Land Management rounds up a few thousand each year for prisoner rehabilitation programs. At the end, it is inferred we should have more of these programs. So, are we preserving the mustangs or directing more to rehab felons? The Mustang receives 3 Gavels and an impressive 94% Rotten Tomatoes rating with a less stellar 69% Audience score.

For the last twelve years, Roman is in prison, mostly in isolation. Let’s say he does not get along well with others. Directed to outdoor maintenance, read that shoveling horse manure, the director of the horse management program gives Roman a chance to connect with wildest of the latest mustang herd. Unable to control his temper, he is ill-suited for the horse. If he can’t tame the horse, it will be put down. But, can he change?

Matthias Schoenaerts, one of my favorite actors, inhabits the role of Roman. He is a loner, even other prisoners give him distance. On the other hand, Bruce Dern is way over-the-top as the grizzled program director. Connie Britton has a small part as the prison psychologist. Fellow prisoner, Henry, played by Jason Mitchell, gives Roman a few tips about horses.

Why is this indie getting so much love? The setting, with the mountains in the background, is spectacular. That prison reform is currently a hot topic may also factor into the ratings. The critics love redemption. Roman smolders for long periods, then erupts. Exploding at a horse does not make him a compelling figure, merely pathetic, or worse. Also, it is sad to see wild horses rounded up by helicopter. It just doesn’t seem fair. Unless you are a big fan of horses, a trip to The Esquire is a stretch. (Roman’s horse, Marquis, puts on quite a show, maybe better than Schoenaerts’.) Still, to rate The Mustang as “certified fresh,” that is also a stretch.