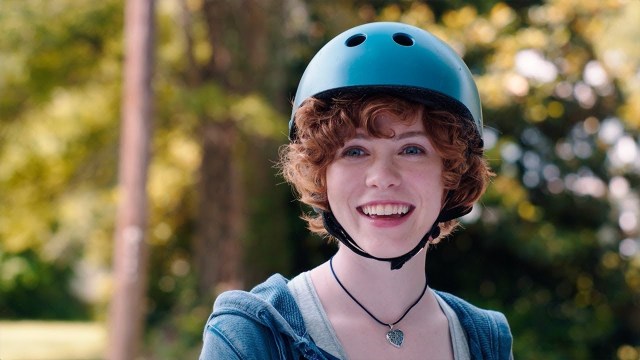 Impressed by a 79% Rotten Tomatoes rating, yet knowing little of the Nancy Drew stories, (after all, we guys had The Hardy Boys Adventures), I looked forward to Nancy Drew and the Hidden Staircase. After all, she is cited as a formative influence by a number of women, from Supreme Court Justices Sandra Day O’Connor and Sonia Sotomayor to former Secretary of State Hillary Rodham Clinton and former First Lady Laura Bush. And the movie starts with such promise, a catchy tune and fancy skateboarding by Nancy. Based on a book written in 1939, I agree with the critic who calls the plot rather thin. I give the film 2.5 Gavels. You might also note that the impressive rating is based upon a less impressive 14 reviews.

Unhappy with her move from Chicago, Nancy is well known to the local police. For starters, she gets revenge on a bully with a chemical that turns him blue. While on clean-up duty as punishment, she meets an eccentric lady who complains that her house is haunted. That lady’s niece just happens to be the girlfriend of the bully. Putting aside their differences is not easy, but a mystery must be solved!

Sophia Lillis is Nancy with the most piercing blue eyes. She, too, seems a little eccentric but that may be the part. Linda Lavin will forever be the old lady with a few quirks, likable as always. Laura Wiggins plays the poor, misunderstood, rich niece.

This is a good TV movie for teen girls. For the rest of the world, not so much. Like so many before, it does a great job of setting up sequels. Given the lackluster history of failed Nancy Drew shows, perhaps the hope for a series was a leap too far. On the positive side, the front of the haunted house was pretty cool. Never again will you see so many pink flamingos. Don’t waste your money on this one; Netflix will have it real soon.