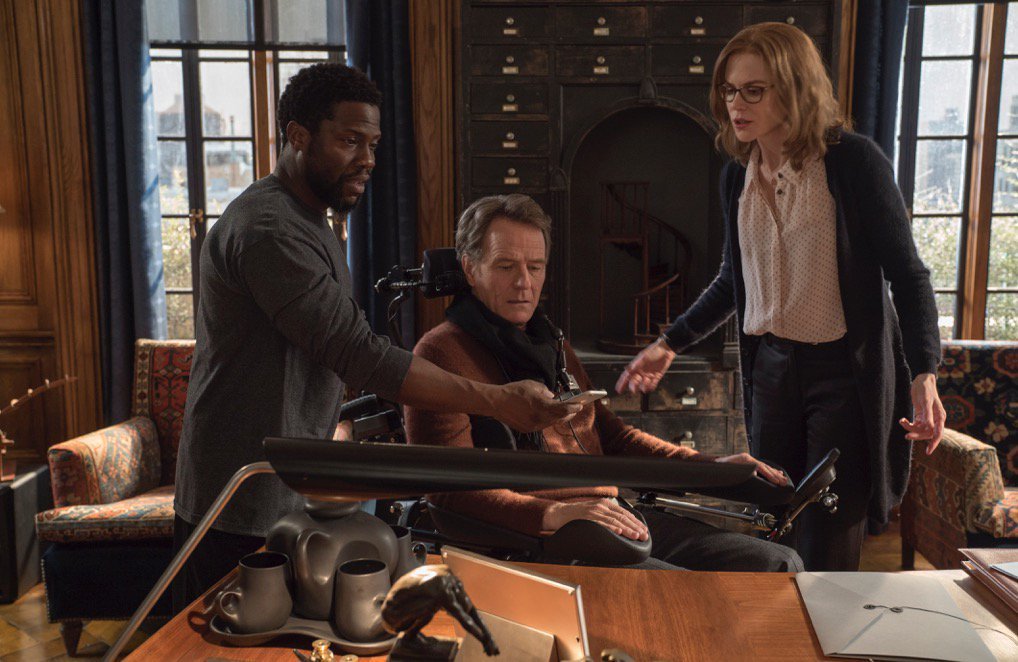 How does a movie starring Bryan Cranston, Kevin Hart, and Nicole Kidman, previewed at the Toronto Film Festival in September 2017, hit the screen in January 2019? Get caught up in the Harvey Weinstein sex abuse scandal and all bets are off. Noting a nice trailer and an Audience score of 79% (quite the disconnect from the Rotten Tomatoes rating of 33%), I was eager to see The Upside. Bottom line–forget the critics. I give this movie 4 Gavels.

Dell needs a signature indicating he is seeking work in order to avoid prison. Phillip needs the worst caretaker possible so he can die. They are a perfect match. Except, Dell needs Phillip to live to provide support for his ex-wife and son. A quadriplegic, Phillip begins to feel again, emotionally. Both have a lot to learn from the other.

Bryan Cranston and Kevin Hart are excellent as Phillip and Dell. The camaraderie between the two is palpable. Cranston’s facial expressions and voice inflections are spot on. Hart, so unlikable at the beginning, becomes such a worthy match to the invalid billionaire. Nicole Kidman is an odd choice for Yvonne. As Phillip’s executive assistant, there is no meat in her role. She could play this character in her sleep. Although her character is essential to the movie, this is about Phillip and Dell.

Unlike you and me, the critics compare this to the 2011 French original, The Intouchables, voted the cultural event for France that year. Later remade in India and Argentina, finally we get the English version. Does this version compare unfavorably? Most re-makes are not up to par, but this one is pretty darn good. The Upside has its ups and downs as it plays with your emotions. This is not your normal fare. From the life of the rich and famous to the squalor of a tenement, and from wonders of the opera to glorious Aretha Franklin, it’s a nice ride, along with some nice “rides.” Put it on your to-do list.

Notwithstanding the critics, this movie will have some staying power due to word-of-mouth. For your convenience, the true story behind this version is found in History vs Hollywood — The Upside.