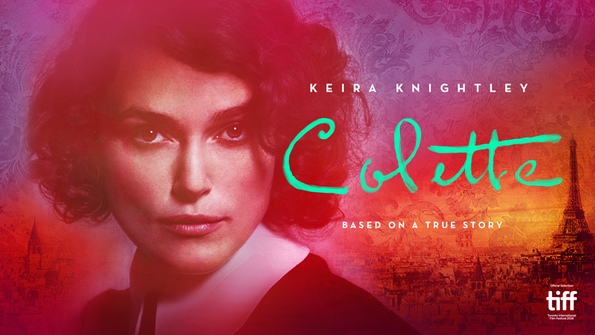 To remind you, Collette is the greatest female writer of French literature of all time.  Further, her unconventional lifestyle would raise eyebrows even today.  So, why is the movie so underwhelming?  The acting is fine; the costumes wonderful.  There just seems to be a glut of these Big Eyes stories lately and this one has little new to offer.   To a large extent, Collette was a victim of the times.  However, she acknowledges that she would never have been a writer except for her husband.  So just what is the impetus for her creativity.  This movie offers minimal guidance unless you point to the Bohemian life in Paris in the late 1800’s.

Collette focuses on her early life, beginning as a young girl without a dowry being wooed by the big-city author.  Who knew he was somewhat of a fraud?  In need of money, he forces her to write, then takes credit for her successes.  He is also a philanderer; not a hypocrite, he encourages her dalliances.  As she “grows,” Collette recognizes that the playing ground is not level.  She requests to be co-author of her own writings to no avail.  Will she have the strength to pull away, to what end?

Keira Knightly is Collette, much better in the role as the aggrieved, grown-up wife than as the naive, young girl.  Dominic West is quite good as the bombastic, two-faced husband, Willy.  For those of you who watch Poldark, Eleanor Tomlinson makes an interesting transformation into a belle from New Orleans.  Collette’s kiss with Denise Gough, as Missy, almost causes a riot.

The real Collette was nominated for a Nobel prize for Literature in 1948.  In 1958, the musical based on her book, Gigi, won an Oscar for Best picture.  She actually married twice more.  Just what did Collette see that so captured her audience?  With just a high school education, the movie makes her writing appear nearly effortless.  That seems unlikely.  There clearly is a bigger story to be told.  Yet another missed opportunity.