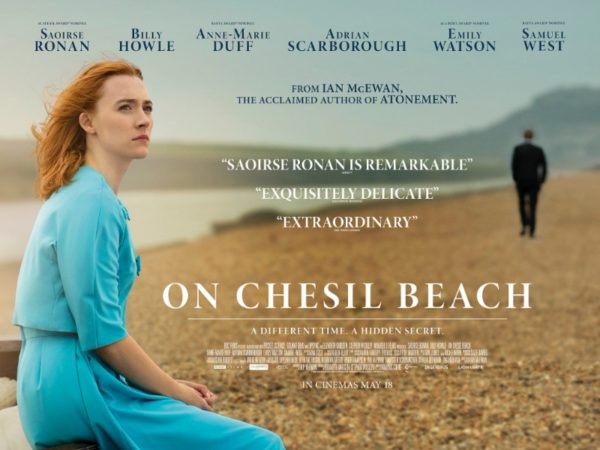 Apparently no one knows exactly how many relationships are never consummated but “educated sources” estimate that it is close to 1%.  On Chesil Beach explores one such relationship, broadly hinting that Florence was a victim of sexual abuse as a child.  At times, this movie moves at a turtle pace, at other times difficult to watch as this couple is unable to adequately communicate their feelings despite being deeply in love.  They are a perfect match except in the bedroom.  The movie is set in 1962 which is clearly “movie code” for a more conservative time.  The novella upon which this movie is based was nominated for the Booker Prize in 2007.

Edward, an aspiring writer, and Florence, an accomplished violinist, meet at an anti-nuke conference. Both have difficult family backgrounds and neither has any experience with the opposite sex.  They quickly fall in love.  Repeated flashbacks are provided from the time they meet through their wedding day.  The pace picks up after the clumsy attempt in bed fails.  Florence runs out on the beach, Edward trailing some time thereafter, and the dialogue is peppered with derision and lack of understanding.  At the end, the scenes advance to 1975, and later to 2007, as the consequences of the wedding night and annulment are explored.

Saoirse (pronounced Ser-sha) Ronan is one of my favorite young actresses.  I probably would not have seen this movie but for her being in it.  The ability to convey an absolute fear of sex leaps off the screen.  At this point, Billy Howle as Edward, is no match for Ronan on the screen.  Emily Watson has a small part as Florence’s overbearing mother. Anne Marie Duff plays Edward’s mother, Marjorie, suffering from a brain injury.  Warning: she appears topless in several scenes.

While this topic deserves attention, the viewers would have been better served if we were given less cryptic information about Florence. What other factors may have been present?  SPOILER ALERT: It appears she was able to get past her fears of sexual intimacy later in life.  How was she able to do that?  Years of therapy?  A more understanding partner?  Maybe the author intended to leave us swinging in the wind.  For me, once the author delved into this problematic area, a more informed resolution was necessary.  But, what do I know?  I’ve never been nominated for a Booker Prize.