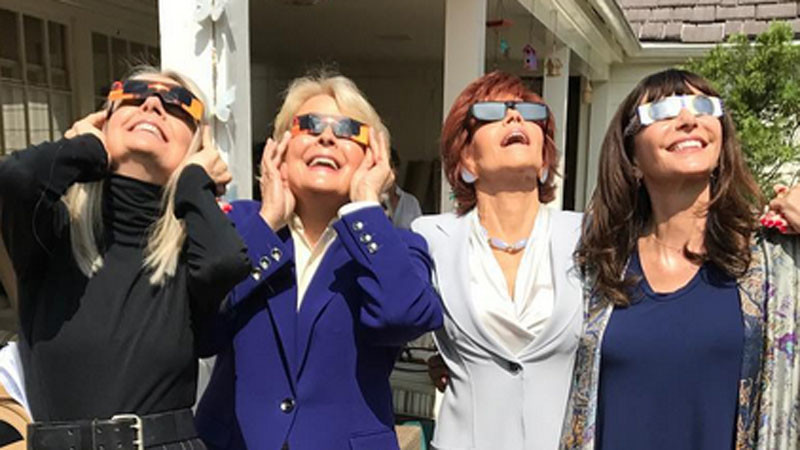 No one wants to think about their parents having S-E-X.  So why would anyone under 50 ever go see this movie?  Or, maybe it’s just good counter-programming to Deadpool?  Let’s see:
Jane Fonda (80) —  Don Johnson (68)
Diane Keaton (72)  —  Andy Garcia (62)
Candice Bergen (72)  —  Richard Dreyfuss (70)
Mary Steenburgen (65)  —  Craig T. Nelson (74)
These are all quality actors.  The problem is that the characters played by Fonda, Keaton, and Bergen are so different than what makes them unique.  They are strong, independent women in real life.  Quite unlike Murphy Brown, Bergen plays a bumbling, insecure federal judge.  Fonda’s character is a hotel owner who  is afraid to love because it might break her heart.  Diane Keaton is a recent widow who allows her daughters to tell her that she is unable to take care of herself without a man.

The aforementioned ladies formed a book club 40 years ago.  Vivian decides to shake things up by selecting 50 Shades of Grey as her book of the month.  Vivian has no shortage of men in her life but never lets them sleep over.  Carol remembers when her husband couldn’t keep his hands off her but something happened in the last six months.  Sharon has no idea how to get a date and has been celibate since her divorce 18 years ago.  Diane’s husband died a year ago and is unsure if it is time to get on with “life.”

Keaton is Diane.  Did they give her character’s name Diane so she wouldn’t forget her stage name?  Fonda is Vivian.  At 80, she looks younger than her counterparts.  The movie makes reference to a doctor assisting her “figure.”  Could this be a reference to lots of other doctors she has seen lately?  Bergen is Sharon.  Ed Asner said about Mary Tyler Moore, “You have spunk. . . .”  Bergen has spunk.  Alas, her character needs some spunk.  Steenbergen is Carol.  Her best line in the previews is when the female police officer tells her to have a “good night” after observing Nelson’s “Viagra predicament,” she gives a sly smile and says “thank you.”  They cut out that line in the movie.

For those of you hoping for so much more, I think you will find this worse than expected.  While I heard lots of female audience laughs, I refer you to the audience score above.  At best, it is mildly amusing.  At worst, it is predictable and slow.  The movie is projected to gross $10 million this weekend.  The quality of the actors will likely cause that to happen.  Given the release of Han Solo next week and the tepid reviews, expect this one on Netflix rather soon.  The movie was produced by an indie production company called June Pictures.  I am predicting a June  swoon.