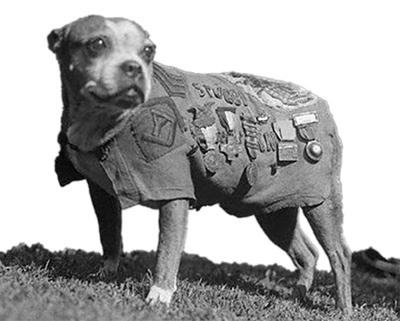 All Hail a movie you have probably never heard of based upon the true story of a dog you have probably never heard of!  First, no one does a movie with a genre of Comedy and Animation and Adventure and Kids and Family and War.  Those just don’t go together, but it works for Sgt. Stubby.  Second, why do schools teach a lot about WWII but very little about WWI–the war to end all wars?This dog is the most decorated dog of all time.  Four books have been written about him.  When he died, The New York Times gave him a one-half page obituary.

In 1917, Stubby was a stray in New Haven, Connecticut, when he was “adopted” by Robert Conroy at an Army training facility.  As the unofficial mascot of the unit, he is “smuggled” onto the ship to France.  Conroy and his men work with a French soldier named Gaston Baptiste.  The movie shows how Stubby helped warn of mustard gas, find wounded soldiers, and even helped capture a spy.  Stubby was injured twice, involved in seventeen battles, and served for eighteen months until the end of the war.

The movie is narrated by Helena Bonham Carter as Conroy’s sister relates the exploits of Robert and Stubby.  Gerard Depardieu is the voice of Gaston, one of the three musketeers, i.e., Robert, Gaston and Stubby.  Logan Lerman (Percy Jackson films) voices Conroy.

How do you make a war movie suitable for kids?  Although it shows the seriousness of war, it is not graphic, more educational than explicit.  For adults, most will learn more about the American participation in WWI battles than you ever did in high school.  You will even see Patton put Stubby on a newfangled tank toward the end of the war, although that may be one of the few exaggerations of the film.  And, like all animals in movies, Stubby will forever worm his way into your heart, no matter what your age.  Go see this movie.  It is much better than my limited skills can portray.  You will thank me for it.