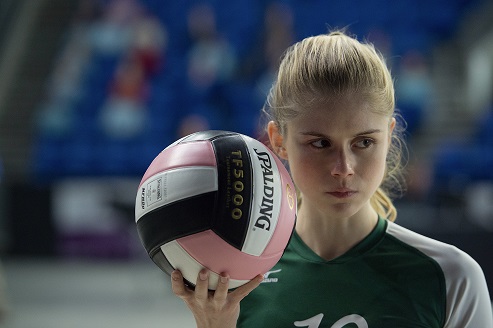 Have you ever met a person who was so bubbly, so annoyingly positive, that you wanted to avoid them?  I’m not sure I have either.  But Caroline Found is portrayed as such a person, almost too sugary sweet.  But inside, she had the heart of a champion as shown by helping to win the 2010 Iowa State Volleyball Championship.  And now, as the team’s best player, setter and captain, she is determined to be part of one of the few schools in Iowa history to go back-to-back.  Her mother has a terminal illness and she wants to win for her Mom.  As in all good sports movies, there is a a mountain to be climbed; for West High, it is Caroline who is tragically killed as the season begins.

Coach Kathy Bresnahan does not have a lot of options.  Her team doesn’t want to play and she doesn’t have a true back-up setter, anyway.  She turns to Kelly, Caroline’s best friend, to convince the others to come to practice, and to take the position that will touch the ball on every possession.  Eventually, the team decides to compete, but are tentative.  Everyone wants to win for Caroline, but none want to be the one who fails.  Will anyone step forward?  Will anyone lead?

Erin Moriarty (True Detective, Jessica Jones) plays Kelly and carries the show.  In 2014, she was named one of the best actors under 20 by IndieWire, and it shows.  Danika Yarosh (Jack Reacher: Never Go Back) was her equal as Caroline, although her part was over much too early.  The “adults in the room” were played by Oscar winners Helen Hunt and William Hurt.  Hunt is Coach Bresnahan and Hurt is Caroline’s father.  Both played their parts close to the vest, as expected as both were in deep mourning.  You don’t get to see them at the full range of their abilities, but what we get is still better than most.

Like I Can Only Imagine, this is a very emotional movie.  The director never misses a chance to remind you of all these girls had to endure.  And this is one movie that I guarantee you will sit through the credits.  I would have liked to fill you in on the accuracy of this movie and its budget.  However, the best I can do is to say that the director admits making “changes” so that the “essence” comes out in the end, whatever that means.  I found no information on the budget; it is projected to make $3.5 million this weekend, typical for a movie banished to the far ends of the theater.  Nevertheless, if you like sports movies (Hoosiers, Brian’s Song, Rudy, Miracle on Ice, Remember the Titans), you will like this one.