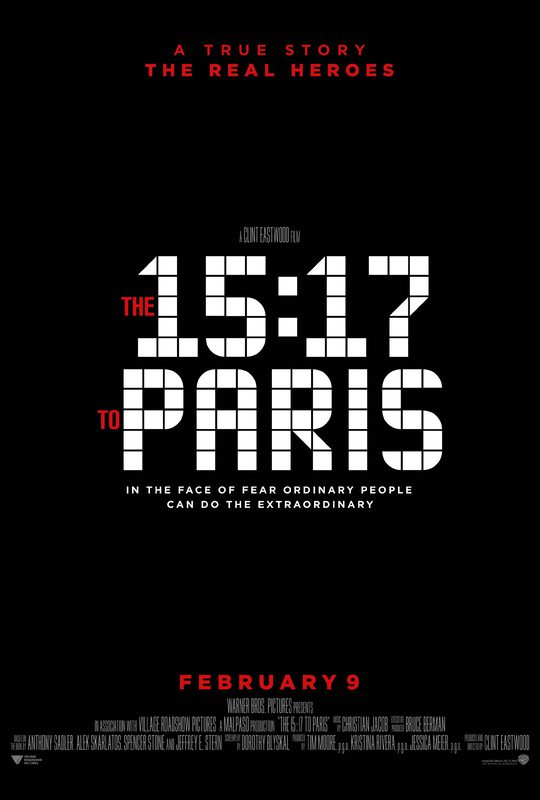 Make no mistake; these gentlemen are real heroes, lucky to have survived this terrorist attack.  But, Clint Eastwood made a major mistake in casting them in the movie.  Only 94 minutes long, the movie already suffered from a dearth of material.  If I saw one more selfie on their backpack trip around Europe, I was ready to scream.  Sadly, the critics got this one right; Eastwood mailed this one in.  Of course, the script gave him little help.  The lack of acting experience by the major characters was just one more nail in the coffin.

Spencer, Alek, and Anthony were childhood friends, clearly not part of the “cool kid” set.  As youngsters, they have trouble in school.  The movie primarily focuses on Spencer, failing at one thing after another.  Circumstances split them apart, but they maintain contact with Spencer and Alek joining the military.  In the summer of 2015, traveling together thru Europe, fate places them on a train from Amsterdam to Paris.  Awards of the French Legion of Honor await them.

Of the three main characters, Alek appears to have some acting ability, but since he was not in the the military, his part in the movie is limited.  Anthony has no acting skills whatsoever, and I am guessing that his part was cut drastically because of it.  Spencer, God bless him, tries his best.  Judy Greer is Spencer’s mother and a fine actor.  The difference when the two are on screen together is glaring.

This movie cost $30 million to make.  I was very surprised.  It gives all appearances of a Hallmark Movie Channel $10 million movie at best.  Other than moving around Europe for all the selfies, I have no idea why this movie cost so much?  They sure didn’t spend it on actors or screenwriters.  Even the final action scene on the train, although heroic, seemed anticlimactic.  Overall, this was just poorly done.  These heroes deserved better.  We movie-goers deserve better, too.