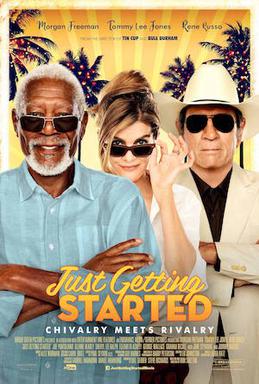 After last night’s “Disaster, ” I would like to be able to report to you that this movie was a pleasant diversion, which would be damning with faint praise.  Sadly, it is not even that good.  Remember when any of Morgan Freeman, Renee Russo or Tommy Lee Jones starring in a film meant that it was a quality film?  Apparently, those days are gone.  This movie was just not funny, and the chase scenes are some of the worst you will ever see.  It was nice to see Johnny Mathis for those of you who can remember him.  Other than that, not much here.

Duke Diver is the alpha male at a retirement villa until Leo shows up.  Leo beats Duke at poker, golf, and “interferes” with his ladies.  Suzie arrives, attracts the attention of both, and the contest is on.  Except they all have secrets, including that the mob wants Duke’s head on a platter.  All of this takes place at Christmas time with the desert in the background.

The plot is bad; the dialogue is even worse.  These actors must have signed contracts to be in this movie without ever seeing the script.  No way they would have been in something this weak.  Unless, with a $22 million budget, most of the money went to them.  Bottom line:  Watch a really bad Lifetime Christmas movie.  You will get the same feeling and it won’t cost you anything.  It’s obvious that the theaters are showing these terrible movies just to clear space for Star Wars next week.  This one won’t be around long!