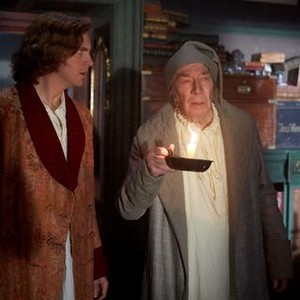 And on the fourth day after Thanksgiving, Pastor Mark DeYoung said “Thou shalt go forth and see The Man Who Invented Christmas and life will be good.”  And TMJ replied to his former law clerk “Lead me not astray.”  While Mark did not create the heavens and the earth, he did recommend a fine movie, although this mostly true biography is sometimes difficult to watch.  While it is quite interesting to see how characters and scenes come to life, Charles Dickens’ struggles with his father,  writer’s block, and financial problems depict a man with his own demons.

In 1841, Charles Dickens is celebrated around the world for Oliver Twist.  Two years and three failed books later, together with profligate spending, Dickens is under pressure to avoid debtor’s prison himself.  Even though Christmas is a “minor holiday” in Victorian times, he decides to write a Christmas book notwithstanding the reservations of his publishers.  With only two months until Christmas to write, illustrate, and publish the book, Dickens is under great stress.  As ideas come to mind, the movie shows Dickens interacting with his own characters and proving the old saying that “one should write what he knows.”

Dan Stevens is Charles Dickens and presents him as somewhat of a tortured man; perhaps 10 kids and a lot of bills will do that to you.  By far, the star of the movie was Christopher Plummer as Ebenezer Scrooge.  With his ‘bah humbugs” and his gruff demeanor, he was born to play this role.  Jonathan Pryce, former pitchman of the Infiniti automobile and a very fine actor, is Charles’ father.  For those of us who have not studied Charles Dickens, his relationship with his father will surprise you.  You will certainly recognize Simon Callow who has a small role as the illustrator.

History vs Hollywood confirms that Charles did work in a factory as a young child and that his father was in debtor’s prison for a few months.  One of the finest writers to ever live is described as “having a lack of formal education.”  The movie does not attempt to explain this except to show a well-stocked library inferring that Charles was well-read.   I did not find this to be a “fun” movie, rather an educational one.  If watching A Christmas Carol, or its various versions, is your Christmas tradition, then this is a movie you will likely want to go out and see.  If not, I would wait until it comes out on Netflix and watch some night when you can’t find anything better.  Doesn’t make me right, but Mark probably enjoyed this movie more than I did.  Bah Humbug to me!