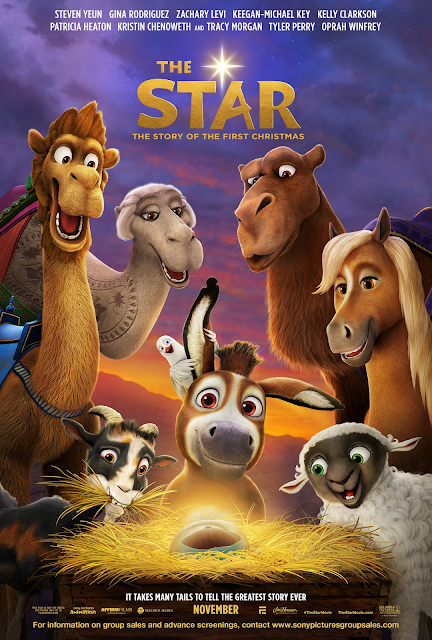 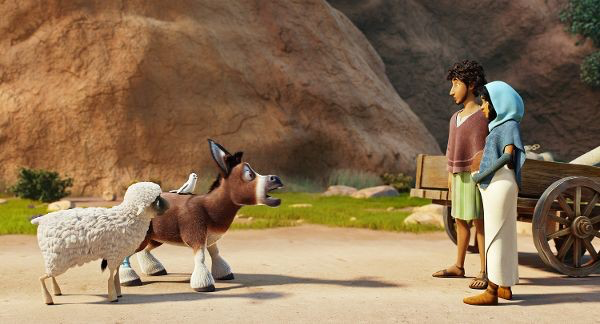 Will The Star be a star for years to come?  Why not?  It has a classic story told through the lens of some very funny animals.  It has some great Christmas songs and a couple of new ones.  While I tend to get annoyed when Christmas songs are played on the radio before Thanksgiving, since I heard my nine year old granddaughter tell Alexa to play Xmas songs last week, I tend to be, well, less annoyed.
This is definitely a movie that will get you, and your kids in the Christmas spirit.  And, it’s almost Thanksgiving.

Our story begin nine months before the birth of Jesus.  The animals begin to notice the bright star glowing in the night.  Bo, the donkey, escapes from his owner and arrives at the residence of Mary and Joseph, soon joined by his best friend, Dave the dove.  The three wise men, accompanied by their three wise-cracking camels (Felix, Cyrus and Deborah), tell King Herod of the new king; he is not happy.  Herod sends his henchman and his two vicious dogs, Thaddeus and Rufus, to “take care of the problem.”  Bo and Dave help Mary and Joseph get to Bethlehem with the assistance of an overly friendly sheep named Ruth.

Steven Yeun as Bo and Keegan Michael-Key as Dave have great rapport as best buddies.  Likewise, Tracy Morgan, Tyler Perry and Oprah Winfrey as the three camels are quite a hoot.  And Ving Rhames and Gabriel Iglesias have just the right voices for the dogs who want to tear you apart.  For good measure, you will also hear the voices of Kelly Clarkson, Mariah Carey, Kristen Chenoweth, Christopher Plummer, and Kris Kristofferson.

Complaints that this is a movie existing “purely for commercial purposes” fall on deaf ears.  Aren’t all movies made to try to make a profit?  Will this movie please all audiences?  No, but it doesn’t try?  It merely attempts to re-tell a story from a different perspective and entertain at the same time.  That, it does well.  At the showing I attended, once again, lots of giggling.  Isn’t that the reason we go to movies.  Watch this one and you will have a warm glow about you as you leave.  Can’t ask for much more than that.