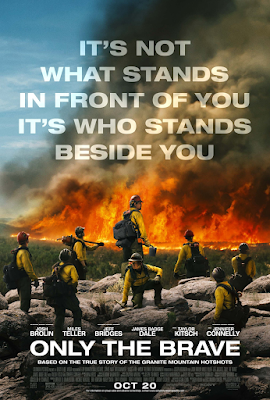 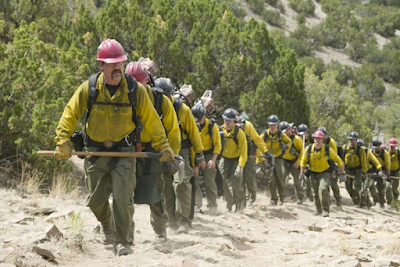 Based on a true story, a group of Prescott, Arizona firefighters have been trying for over 3 years to become certified hot shots.  Never before has such a group attained such elite status.  This story gives some idea of the dedication, training and bravery needed. It also is a story about the hardships families endure as these courageous souls travel the country protecting lives and property.  You will see the awesome fury of fire as these men chase it to the rim of the Grand Canyon, the burning trees exploding as they smash into the bottom of the canyon.  You will see the just how fast that fire travels as it is fanned by fickle winds.  About the only thing you won’t experience is the intense heat of these “fires from Hell.”

Josh Brolin is a quality actor and he delivers as Eric Marsh, the “Supe.” You trust and believe in his leadwership.   Generally in this type of movie, the spouse is mere window dressing.  Jennifer Connelly is no shrinking violet; the sparks fly as the two love and fight.  I had some concerns early in the movie about Miles Teller (Donut) as the young screw-up, but he found his footing as the plot progressed.  Jeff Bridges just keeps rolling along with yet another solid performance as the old mentor.  Unfortunately, Andie MacDowell was the aforesaid window dressing as his wife.   The second in command of this group of hot shots was Jesse Steed played by James Badge Dale.  Hopefully, we will see much more of him in the future.

According to History vs Hollywood, this movie is mostly true, and like real life, it doesn’t provide all the answers; unlike real life, it doesn’t assess blame.  Given the recent California wildfire-related deaths, this story becomes even more relevant.  Great respect must be given to these heroic figures and this movie is a solid contributor.  You won’t regret the time spent learning about the lives of the Granite Mountain Hotshots.

As an aside, I viewed this movie at the new theater at Austin Landing, part of the Cinepolis chain.  While advertised as being a unique movie experience, it is similar to others unless you want to dine.  But if you like new, its Grand Opening is this Sunday.   I found it just to be another good option to find the movie I want at the time I want.  And if you sign up on their App, you get one 85 ounce buttered popcorn for free.  I like free!