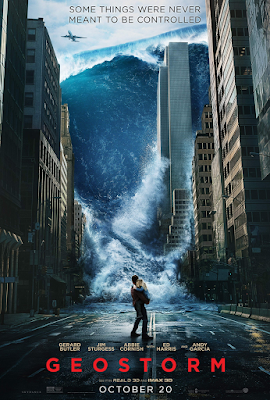 It’s really not THAT bad!  Faint praise.  The plot and dialogue leave something to be desired.  But it’s a Gerard Butler action movie.  Whoever cast Andy Garcia as the President should be fired.  But whoever cast Abbie Cornish as the k__ a__ Secret Service agent should be hired.  The science is far-fetched.  But the the visuals are pretty cool.  I certainly have seen a lot worse sci-fi movies, Independence Day 2, for example.  Damned again by faint praise.

In 2019, the world decides it must do something about the storms that are getting more and more destructive.  Jake Lawson is hired, along with a team of scientists, to develop Dutch Boy to stop these cataclysmic events.  The satellites work as expected for nearly three years until one, then another, malfunctions.  Max Lawson, must beg his brother to go back into space to locate the problem before further deaths occur.  Jake and Max both come to the same conclusion; someone is trying to sabotage the system, but who and how?

Gerard Butler is Jake, believable as muscle in 300, not so much as brain in Geostorm.  Jim Sturgess is Max; I’m not sure he was the right choice either.  Sleepwalking through this movie was Ed Harris as the Secretary of State.  Alexandra Maria Lara needed more screen time as the Commander of the Space Station.

If you want to see this movie on the big screen, you better hurry.  This movie has flop written all over it.  Filmed in 2014, re-shot and re-cast in 2015, release dates changed from 2015 to 2016 to 2017, it is understandable the producers would try to recoup some of their money.  Rest assured, it will be on Netflix soon.  And then, as I said, it’s really not THAT bad!  It’s a lot better than Orville on FOX.  There’s that faint praise again.