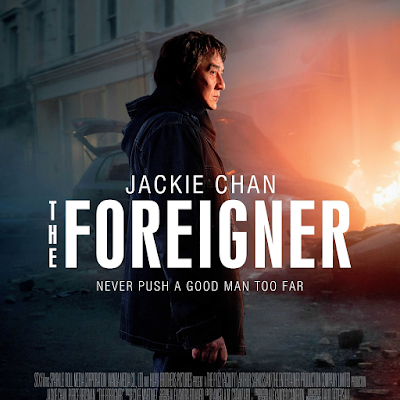 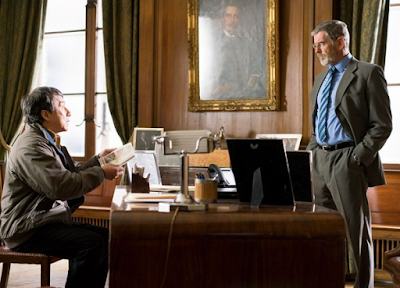 Jackie Chan is 63.  In case you missed it, Jackie Chan is 63.  The Foreigner is an intense, entertaining flick because of Jackie Chan.  He says he can also sing and dance; maybe someone should give him a chance.  Warning:  There are multiple bombing scenes in the movie which will be unsettling to some viewers, especially given recent terror events.  Here, Jackie is always one step ahead of the authorities in bringing the bad guys to justice.

As the film opens in London, Quan is driving his daughter who is excited about picking up a new dress for the dance.  As she enters the dress shop, a bomb explodes killing her and numerous others.  “The Authentic IRA” takes “credit” for the bombing, but the IRA has been dormant for years.  The Irish Deputy Minister, Hennessey, a former IRA member, is ordered by the British to turn over the guilty parties.  Publicly, he claims that the IRA knows nothing about it, but it is clear that he has the contacts to find those responsible.  Quan, a former special forces member, focuses on Hennessey to get “names.”  His ability to turn the screws on Hennessey, facing overwhelming odds, gives the movie its intensity.

Jackie Chan is Quan and his martial arts skills are doing just fine, thank you.  He complains that he doesn’t get many dramatic acting roles outside China and his lines are limited.  Pierce Brosnan as Hennessey gets a chance to be a bad guy and he doesn’t disappoint.  It is a shame he and Jackie were not onscreen together for longer periods of time.  Because there are so many moving parts (old IRA, new IRA, government, police, henchmen, media, and relatives), no others had any major part.  Even though rarely seen at the same time, Jackie vs. Pierce is this movie.

At its core, this is a revenge movie.  Like Taken, Quan has a set of special skills and will make sure the bombers are punished.  I certainly did not expect a movie about the resurrection of the IRA. Hopefully, it is just some crazed idea from the 1992 book The Chinaman and it has no basis in fact.  That petty issue aside, if you liked Liam Neeson in Taken, you will like Jackie Chan in The Foreigner.  That “James Bond” is along for the ride makes it so much the better.