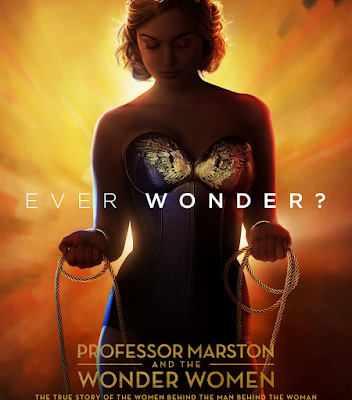 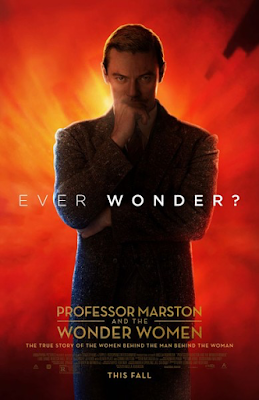 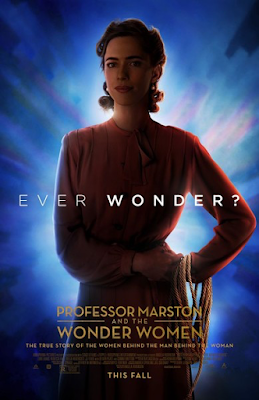 In 1928, Marston (a lawyer, psychologist, professor, inventor) is teaching at the female version of Harvard with his wife, Elizabeth, (a lawyer, psychologist, inventor) as his assistant.   Olive, his 22 year old student, volunteers to help in his research.  The research eventually leads to a love triangle that gets him fired.  Unable to get another teaching job, Marston eventually stumbles on the idea of a female superhero.  His wife and lover are initially skeptical, especially after learning that some of his ideas arose after he visited a shop for unconventional lifestyles.  Interestingly, Olive was the niece of Margaret Sanger, noted feminist of her day.  Note that Wonder Woman was not created until 1941.  If this relationship, which included children with both women, raises eyebrows now, imagine the outcry in the ’30’s.

Luke Evans (Gaston in Beauty and the Beast) gets his name in the title but this movie is really about the strength and feminism of its two female wonder women.  Both are excellent.  Rebecca Hall is Elizabeth and you can believe that she was every bit her husband’s equal in every way, strong and determined.  Bella Heathcote (The Man in the High Castle) is Olive, somewhat naive, but very smart and creative.  There is no question that these two combined were the inspiration for Wonder Woman; the movie gives the impression that if either one were not in the picture, then it is very possible that Wonder Woman would not exist.  Oliver Platt is cast as the founder of DC Comics. Connie Britton as the leader of The Child Study Association interrogates Marston with concerns about the way Wonder Woman is depicted and whether he is conducting some sort of psychological experiment on kids.  Both were good choices.

The movie has a strong sexual conduct warning, not so much for any display of nudity, but more for its language and discussion of topics not generally mentioned at the dinner table.  Polyamorous relationships, lesbianism, bondage, and pornography are discussed; these folks knew they were likely to become pariahs.  Given that Marston was 35 at the time he met Olive, a government psychologist during WWI, and founder of the DISC Theory (Dominance, Inducement, Submission, and Compliance), one might suggest that he was grooming Olive.  Marston would argue that he was freeing her feminism from the chains of a male society, but it still was a bit creepy.  This is not a movie for everyone.  Don’t dare take children to it just because Wonder Woman is a theme.  But as a historical picture of the origin of a now beloved comic book character, it is fascinating and well done.  Given her “parents,” perhaps it is not so surprising that it took until 2017 for a major motion picture studio to take a chance on Wonder Woman.