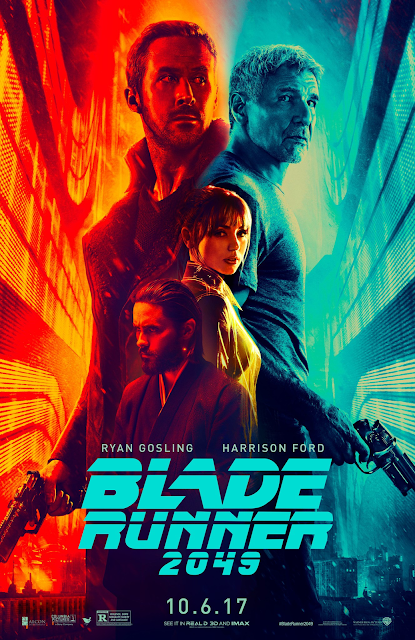 On a dark and dreary night, Blade Runner 2049 was a perfect movie to see, dark and dreary.  While hardcore sci-fi fans will likely fawn over this movie, I like my sci-fi more Gene Roddenberry, or George Lucas.  The original was released in 1982.  If you are going to go see this movie, do yourself a favor and check out Wikipedia or some other source so you can have some understanding of what is going on.  Blade Runner was set in 2019, and given the title, this is 30 years later.  Since we now know the world is not likely to be entirely unpleasant or bad by 2019, why would we think it to be such by 2049?  That minor detail aside, this movie is slow and ponderous.  At 2 hours 44 minutes, it is easily an hour too long.

Since 2019, replicants have rebelled and a “new and improved” set have been developed.   Blade Runners are still needed to wipe out the old rebels.  K discovers that a “miracle” has occurred and an old replicant has given birth.  He is assigned to locate and destroy the “child” before the world is made aware.  If replicants can reproduce, the fear is they will rebel again and no longer will they be slaves.  Not all want this child killed.  Niander Wallace, the current manufacturer of the replicants, wants the child taken alive so he can experiment on it to hopefully increase his production rate.  Eventually, Deckard, from the original Blade Runner, is introduced as a “protector” of the child.  If this all seems rather complicated, rest assured, it is.

Ryan Gosling is K and Harrison Ford is Deckard; this movie doesn’t start to click until the two are on the screen together some 90 minutes in.  Jared Leto (Wallace), and his enforcer Luv, (played by Sylvia Hoeks) do make wonderful bad guys.  Ana de Armas (as Joi the hologram) and Mackenzie Davis (Halt and Catch Fire) as a prostitute are”united” in an inventive but wholly unnecessary scene.  Robin Wright (House of Cards), plays K’s boss.

If a movie is measured by a fun quotient, this movie gets less than 2.5 gavels.  If a movie is measured by the dystopian world created, then it probably deserves more than 2.5 gavels.  As you know, I lean toward the entertainment and am not a fan of the darkly filmed movies.  There are drones, flying cars, holograms and smart glasses to be seen, but there is also garbage, over-population, pollution and crashed ecosystems.  To my mind, this is a movie for the glass half-empty, rather than the glass half-full.  Overall, not my cup of tea.