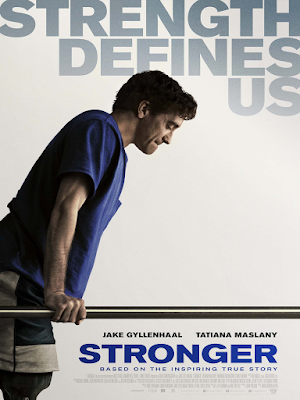 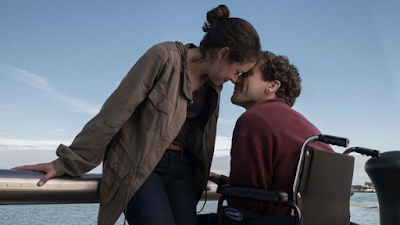 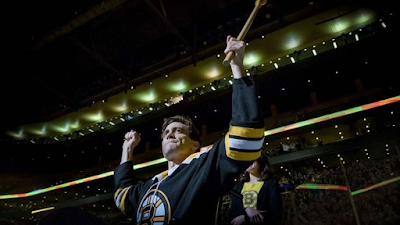 If you were expecting a Patriots Day movie, you will be disappointed.  While that movie dealt with the investigation of the bombing, this deals with the toll on a survivor.  Patriots Day was a composite character; this one is real.  It is not easy watching his grueling physical recovery. But his psychological recovery is even more difficult.  Just because people call you a hero, it doesn’t make you feel like one.  His PTSD and depression were just as real.  Add layers of guilt, pain, family expectations and toss in some inspiration and you have a fine movie,

On April 15, 2013, most would probably describe Jeff Bauman as a lost cause.  His job at Costco as a chicken roaster appeared to be a dead end.  He cared more about his Red Sox (and his beer) than his relationship with his girlfriend, Erin.  Promising to make it up to her, he told her he would meet her at the finish line of the Boston Marathon.  Jeff being tended to by the man in the cowboy hat is one of the iconic pictures of that day.  Jeff’s family is not a likable lot; in polite circles they would be known as having “rough edges.”  Dealing with therapy while living with his alcoholic mother (who fights constantly with his girlfriend), is but one of the many issues Jeff must overcome.

Jake Gyllenhaal plays Jeff Bauman in what must have been a difficult role.  He does not make Jeff an entirely sympathetic character.  But, since the movie is based on Jeff’s book, it must be an accurate one.  Tatiana Maslany was excellent as Erin tortured knowing that Jeff would not have been at the race but for her.  Miranda Richardson has played the boozy mother role so many times that she practically invented it.

History vs Hollywood indicates this is a mostly accurate portrayal of events.  While the movie is not a picnic to watch, the ending, especially Jeff’s meeting with the the man in the cowboy hat, is quite hopeful.  And, Jeff finally comes to the realization that others are going to need him as much as he needs them.  It is a truly poignant moment, one that promises a better future for Jeff.  Overall, a good movie, not a great one, but worthy of two hours of your time.