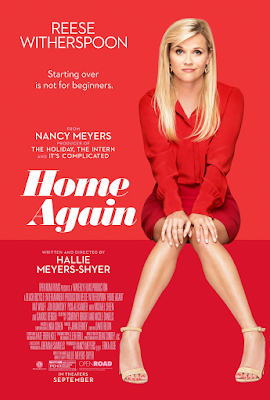 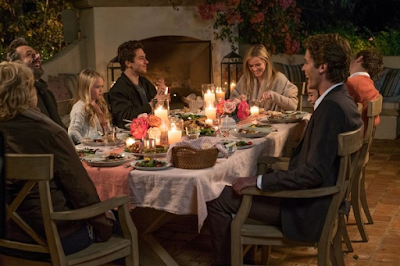 How can any movie that has Johnny Mathis singing “Misty” be anything but perfect?  If there is such a thing as comfort food, then this is a comfort movie.  Pure vanilla!  It needs some salt, pepper, chocolate, something to spice it up.  One would think that any movie with Candice Bergen (Alice’s mother) in it would have some pizzazz, but sadly she was barely to be seen.  Worse yet, her acerbic tongue was barely heard, nary a disparaging word.  So disappointing.

Alice has recently separated from her husband, Austen, and has just moved into her late father’s house in LA with her two adorable daughters.  It is her 40th birthday and by chance, she meets three late 20-something handsome guys who are trying to get their short film made into a major movie. Since they are broke, Alice’s mother convinces her to allow them to stay in her guesthouse.  Love and complications ensue as Austen returns to try to win back his wife.

Reese Witherspoon as Alice, so good in Wild, is just another rom-com actress here.  One just can’t picture her character with milquetoast Austen, played by Michael Sheen.  In Masters of Sex, Sheen plays a complicated, driven character; here, he is just a cad.  Nat Wolff and Jon Rudnitsky, were fine as two of the young guests, but Pico Alexander as the leader of the aspiring filmmakers was just a pretty face.  The saving grace of the movie was the two kids played Lola Flanery and Eden Grace Redfield; they were scene stealers although not much to steal.

Don’t get me wrong, this is not a bad movie.  It is just a movie to watch on a cold rainy night with a glass of wine and bowl of popcorn.  It is not a movie that you get invested in the characters and so the blah ending will not come as a surprise.  A pleasant movie it is, but not one that you will tell your best friends that they have to see it.  If the ambience is right, you might even catch a short nap during the movie.  Bottom line–better than Lifetime, but not good enough to plunk down $9.00.