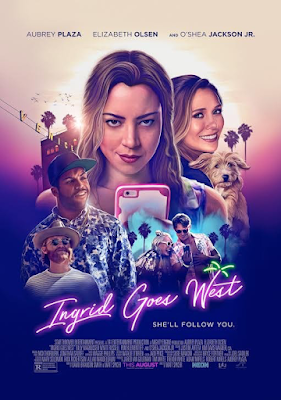 If the NFL is the No Fun League, then this is the NFM, the No Fun Movie.  Perhaps if you are a psychology major, you might find these specimens interesting to observe; the rest of us just find this sad.  We don’t understand why people watch those who are famous for merely being famous, e.g., the Kardashians.  And for those who characterize this as a spoof, that is supposed to be a humorous imitation, but I found little humor here.  Hopefully, we were not to find Ingrid’s obsession humorous; mental health issues are serious and should be dealt with in a far more adult manner.

Ingrid has stalking issues in her hometown as the movie begins.  But her release conditions obviously did not deal sufficiently with her Snapchat and Instagram obsessions.  She makes “contact” with Taylor in California and decides to move West to seek her out.  At first, Taylor befriends Ingrid, not knowing that Ingrid set up the meet by kidnapping Taylor’s dog.   Of course, Taylor will soon move on to someone else more interesting and Ingrid becomes more and more desperate to maintain the friendship.  Taylor’s brother, cad that he is, suspects the obsession very early and tries to blackmail Ingrid.  You see where this is going; it’s been done before with the social media angle.

Let me say that Aubrey Plaza is very good as Ingrid.  She seems to have very good range and is much better than this (I do note that she is a Producer on this film) and her recent Mike and Dave Need Wedding Dates.  Elizabeth Olsen is fine as Taylor but her husband, Wyatt Russell, was not a good cast.  Taylor would have divorced him years ago.  Billy Magnussen as Taylor’s brother was slimy but way, way over the top.  O’Shea Jackson Jr., Ice Cube’s son, may have been the sole saving grace of the movie as Ingrid’s landlord.

If you want to be depressed, then go see this movie.  Otherwise, I can’t recommend it.  The budget for the movie is not reported, but they wanted to use Seal’s Kiss From a Rose but couldn’t afford it.  I assume that, with good reviews, it might be able to make a profit.  But, this movie appears to be made more for “art,” rather than economics.  Sadly, for me, it failed both!