Quote of the day by Jack Greiner, attorney for the Cincinnati Enquirer, “You don’t need a First Amendment for speech you agree with.”

And, in a salute to a recently deceased, unique comedian—No, not Jerry Lewis, actually I was more of a Dean Martin fan myself, but Jerry’s contributions to Muscular Dystrophy must not be overlooked.  I am referring to Dick Gregory who ran for President in 1968. 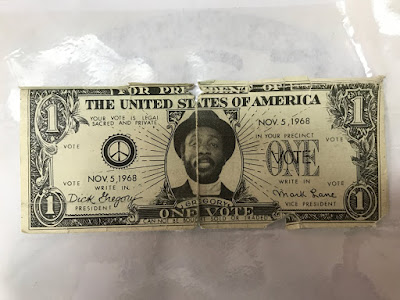 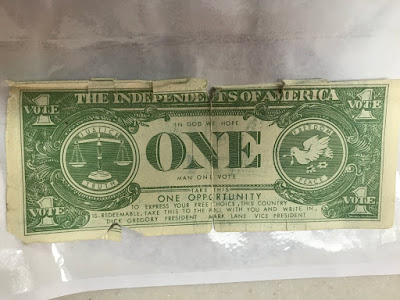 In the fall of 1968, I was a freshman on the campus of The Ohio State University, barely 18 years old, during the tumultuous times of Civil Rights and the Vietnam War. Dick Gregory would come to campuses and pass out these campaign mementos.  The students flocked to get them, not for political reasons, but for economic ones.  The machines that accepted dollar bills at that time were so rudimentary that they thought these were real.  Rumor had it that the Treasury Department went to Gregory’s campaign office and confiscated these.  I don’t recall how I came to possess this one, but as you can tell, I have kept it for nearly 50 years as a political momento.  Perhaps, along with Dick Gregory, it is now time to lay it to rest.

As a further reminder that critics’ ratings are not an indicator of box office success, The Hitman’s Bodyguard with ratings hovering south of 50% made $21 million, while Logan Lucky with ratings north of 90% made less than $8 million.  Ouch–that’s Nut Job 2 territory!  A shout out to Girls Trip that passed the $100 million mark this past week (only $10 million overseas).  It was a nice movie but I certainly didn’t think it would ever reach anywhere close to that mark.  Get ready for Girls Trip 2 in 2018; I’ll bet the script is already in the pipeline.  And Dunkirk should pass the $400 million mark this week.

Sequels, sequels, sequels.  Now the writer of Dirty Dancing is ready to do a sequel for Johnny and Baby, to focus on their future.  Casting to replace Jennifer Grey and Patrick Swayze would be fun but certain to be criticized.  It’s always tough to follow the icons.  By the way, for you oldsters, Dirty Dancing is 30 years old.  Other sequel movies around the corner include Shaft, Mama Mia: Here We Go Again, Terminator 6, Aladdin, Creed 2, and Hellboy.  July 2019 is to bring us Top Gun: Maverick. Although not a sequel, but admittedly she has been on the scene for a while, is a movie called On the Basis of Sex which is a movie based on the life of Ruth Bader Ginsburg.  If only Gilda Radner were still alive, she could have easily been made up as the Supreme Court justice.