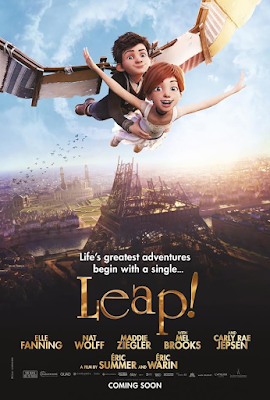 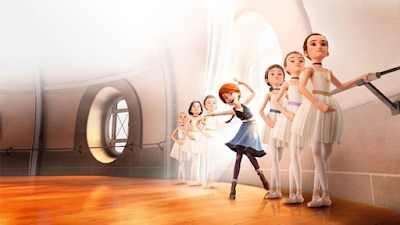 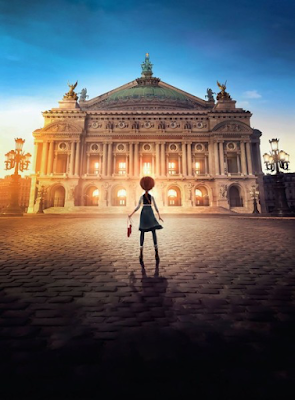 Sacre Bleu!  Surprising that I like a movie that the critics don’t?  Not really.  What is it that the critics have against the French?  Yes, this rags-to-riches story has been told a zillion times.  Critics didn’t complain about Cinderella.  And, at times, one has to suspend belief that “if you work hard . . .” and then watch Felicie learn ballerina steps overnight.  Well, didn’t I have to suspend belief to watch the Fairy Godmother turn a pumpkin into a carriage?  This movie will be enjoyed by every girl who ever wanted to be a dancer, or a princess.

Felicie and Victor dream of life outside the orphanage.  Felicie wants to be a prima ballerina at the Paris Opera Ballet.  Victor wants to be an inventor, and who better to get to know than Gustav Eiffel.
(This computer-generated animation film shows both the Eiffel Tower and the Statue of Liberty.)  As in all movies depicting ballet dancers, one has suffered a serious injury, in this case Odette.  She helps Felicie, not only in her dance , but also to beat her snobbish competitor, Camille, and her evil mother,
Regine Le Haut.  And, of course, there must be the tough instructor, Merante, who recognizes the raw talent, passion and heart of Felicie.

Felicie is voiced by Elle Fanning, Odette by Carly Rae Jepsen, and Regine by the deliciously evil Kate McKinnon.  As a special treat, Mel Brooks voices the bad guy supervisor from the orphanage.

One of the perks about being a movie critic is that you get to see movies like these that I otherwise would not have attended, at least not without a child under 13 by my side.  At this viewing, my wife and I were the not only the only adults in the theater, but we were the only persons of any age in the theater.  That probably does not bode well for a lengthy stay for Leap! which was released in Europe as Ballerina.  (It has already made about $60 million on a $30 million budget.)  Still, grab your daughter, or granddaughter, and go see this movie.  I guarantee they will like it and will have plenty to talk about on the ride home.  And that folks, is worth much, much more than the cost of any movie ticket!