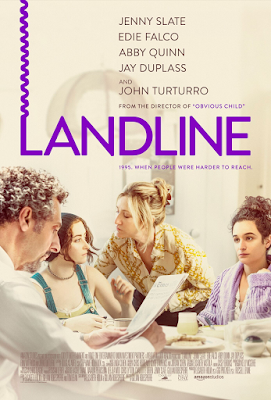 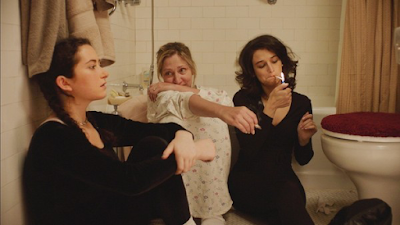 Landline is set in the 1990’s, a time without cellphones, allegedly a nostalgic time.  It is a movie about exploring sexuality and drugs, and examining the consequences of infidelity.  The movie really should have been entitled Lifeline because these folks were drowning and need lots of help, as does the movie.

Dana is about to get married to Ben but is having second thoughts.  Her teen sister, Ali, is still living at home and does whatever she pleases seemingly without any parental supervision. Ali discovers evidence to cause her to believe that her father is having an affair.  The sisters begin to spend time together investigating the affair and discussing Dana’s cheating on her fiancee.  Neither suspects that their mother has any idea of the affair and want to protect her,  although mom is portrayed as a strong, corporate type.  If, at this point, you ask why you should go see this movie, I completely understand.  This movie has little new to offer, unless of course, you want to see Hillary Clinton in a pink suit.

Given the actors in this movie, it should have been so much better.  Jenny Slate (Dana) has as expressive a face as anyone in the business.  And, how can you go wrong with Edie Falco and John Turturro (parents)?  Both were given such bland characters, they had no chance to shine.  Having said that, they were still more interesting than the two sisters.  Abby Quinn (new to the screen as Ali), seemed to feel more comfortable in her role as the movie progressed.  Her next movie, Bumblebee, is a Transformers movie so we may have to wait awhile to see how her career develops.

Don’t waste your money; I likely wouldn’t waste the ink to add this to my list.  If you are a Falco or Turturro fans, you will be disappointed; they needed more screen time.  Jenny Slate needed a better script.  The characters all had regrets, made bad choices, and had no idea how to rectify their situations.  If you throw them a lifeline, it better be a big one.  All in all, a wasted afternoon.