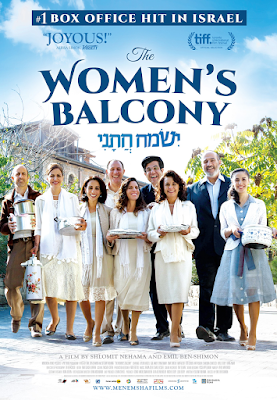 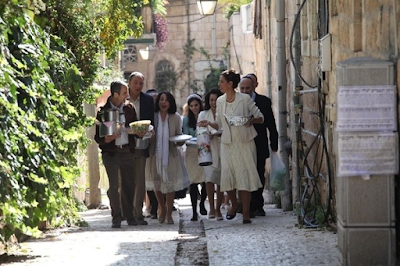 Once again compelled by a 95% Rotten Tomatoes rating, but also aware that the User Score was only 76%, I was determined to see this hit Israeli movie.  And, what better way to observe cultures other than your own?  We know far to little about Israeli life, and most likely, even less about Jewish Orthodox life.   What I expected to be a battle of the sexes turned out to be something a little more.

In this Orthodox synagogue, everything is fine and celebrating a Bar Mitzvah when the women’s balcony comes crashing down.  The Rabbi’s wife is seriously injured and the Rabbi becomes disoriented.  As the male members try to decide how to repair the damage, they come under the influence of a younger, more conservative Rabbi.  Rabbi David tells them that women are more spiritual than men and need to be protected, first with scarves, then with a segregated area, and so on. The women eventually raise the money for a new balcony but Rabbi David insists the scriptures require payment for preparation of a new Bible first–with the money the women raised!

Of course, we do not recognize any of the actors; that the movie is entirely subtitled does not give much help establishing these folks in our minds.  Having said that, the ladies playing the wives, Ettie, Tikvah, and Margolit, and the young unmarried Yaffa, come across as strong confident women.  They truly love their religion, and their men.  The husbands, and the Rabbi, are trying to do the right thing but sometimes it’s not easy to figure out what that is.

So, why didn’t I give this a higher rating?  It appears to me that the director wanted us to believe that Rabbi David was a bad guy, almost evil.  Save for one action that I won’t divulge, the Rabbi was trying to follow the Bible as he understood it; that doesn’t make him evil.  He clearly didn’t fit with these members.  While trying to warn against imposed fundamentalism, it seems to me the director imputed unintended motives to the Rabbi.  While this movie was only one hour 26 minutes, you could see this train coming at you very quickly.  For me, it could have been cut by 15-20 minutes. This is clearly not a movie for everyone, but if you want to learn more Jewish Orthodox life, this may be your avenue.