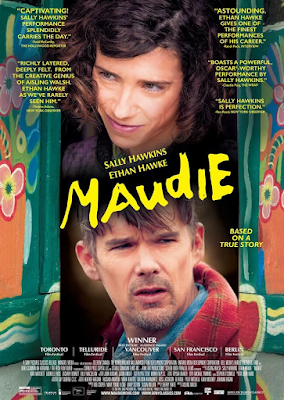 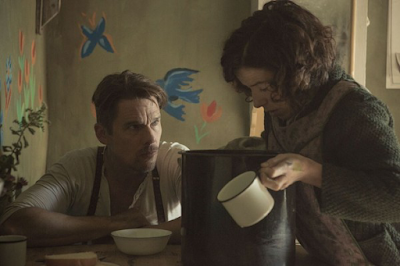 At the recommendation of a dynamic movie buff, and with the added inducement of a free birthday ticket, I ventured to the Mariemont Theatre to see Maudie.  Once again, this is why we love the small independent movie; it is terrific.  An actress gets a once-in-a-lifetime role and she knocks it out of the park (See Charlize Theron in Monster, Halle Berry in Monster’s Ball); Sally Hawkins is not the household name of the aforementioned, but maybe she will be.  Given the topic, I don’t see this movie getting the buzz of The Big Sick.  Also, since it’s a small movie in a summer of blockbusters, it may easily be forgotten come awards time.  That would be a shame; Ms. Hawkin’s performance is Oscar-worthy.

It seems most of the best stories are those that are true.  Maud was born in 1903 in Nova Scotia with disabling arthritis. Neither her brother nor her aunt thought she could take care of herself.  In spite of them, Maud took a job as a housekeeper in a one room shack employed by illiterate, unforgiving Everett.  Without electricity or running water, all Maud asked was for a little kindness and to paint. Next to a large body of water, one can imagine the harshness of their winters.  Maud is “discovered” by a woman that Everett forgot to deliver her fish.  Eventually the whole world discovers her, including the Canadian Broadcasting Company and the Nixon White House.

Sally Hawkins is wonderfully effective as this sweet, sweet woman, stricken by disease, but capable of doing whatever she wanted.  People took advantage of her, over and over, but she overcame it all to do exactly what she intended.  Ethan Hawke as gruff Everett, without people skills, is also very, very, good but may be overlooked because of Hawkins.  Kari Matchett has a small role as the first to acknowledge Maud’s talent.

For those of you not willing to travel, add this to your winter list.  The Nova Scotia scenery, both in summers and winters, is gorgeous.  The small shack, surrounded by tourists seeking her paintings, is comical.  But, above all, it is Maud’s sweet disposition that you will remember, and for that you will thank Sally Hawkins.  As for me, thank you Linda Prince!