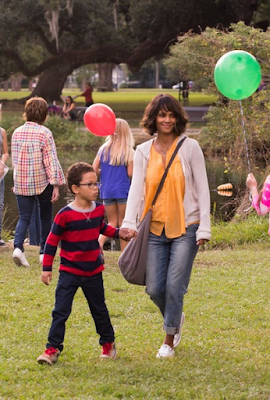 If this was meant to be a ripoff of Taken, someone forgot to tell Halle Berry that she was supposed to say that “she had a certain set of skills. . . ”  This is a fine Lifetime movie but usually you don’t find an actress of Ms. Berry’s caliber in a movie lasting 1 hour and 20 minutes.  Perhaps, no not perhaps, the writer didn’t have much to say.  As in Dunkirk, there is very little dialogue except Halle talking to herself.  This movie is pretty much a chase and nothing else, an extended chase, at that.

The movie begins with Karla Dyson, mother of 6 year old Frankie, getting off work and taking her child to a park.  She is in the middle of a divorce, distracted for a minute talking on the phone to her lawyer.  She sees a woman across the lot hauling off with Frankie, and the chase is on, and on, and on.

Halle Berry plays Karla and is in every scene with lots of closeups reminiscent of Natalie Portman in Jackie.  Frankie is the cute kid played by Sage Correa.  The kidnappers are played by Lew Temple and Chris McGinn and they are suitably despicable.  These four are nearly the only ones to have screen time and, without dialogue, you don’t get the revenge feel of Taken.  The only line of any significance is when Berry says “you took the wrong kid.”  Just not the gravitas of “a certain set of skills.”

For much of the movie, you only see tinted windows and the director tries to build suspense by not seeing the bad guys.  The director also tries to drag you in with the music.  But, without some character development, it has limited effect.  If you like Halle Berry, then by all means, go see the movie.  For most folks, I recommend you wait for Netflix.  It should on on the small screen real soon.