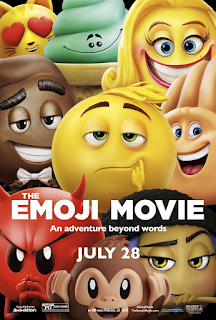 It is never a good sign when a movie has not been previewed in advance, as was the case here.  There is usually a good reason.  For a long time, Emoji was flirting with the worst Rotten Tomatoes record ever.  Should I go see it?  You let me know what you think.  Could it really be as bad as the critics say?

Brutal is the only way to describe their comments.

Timeout says “keep your children away.”

RogerEbert.com says “artistic abdication at its most venal.”

New York Post says “Hear that? It’s the end of the world.”

Perhaps my favorite:
MaraMovies.com  says “Excuse me while I scan my phone for a vomit emoji.”

Blu-ray.com says ” a soulless endeavor and a painful viewing experience.

Poor Patrick Stewart.  Classically trained with the Royal Shakespeare Company and, even more impressive, Captain of the Starship Enterprise, being “forced” to be the voice of Poop.  I say he was forced because surely he wouldn’t do this just for money!

Rather than endure this fiasco, the little lady and I took a quick trip to Chicago to see Disney’s Aladdin.  (Disney is making the movie with Will Smith cast as the Genie.  He seems a great choice although he will always be compared to Robin Williams.)  It was good, not great, at least not great as compared to Lion King.  The quips come fast and furious and, as you might expect in Chicago, at one point the Genie pulls a Cubs hat out of his bag.  The audience cheered.

Overall the cast did a fine job except I thought the two leads didn’t quite have the chops for the song “A Whole New World.”  The show stopper, if you will, was the entrance of the Genie in the cave during the song “A Friend Like Me.”  That scene was most impressive.  Iago, the evil Jafar’s little buddy, gets a lot of great lines.  In any case, the show is now touring and likely to be in Cincinnati or Dayton in a year or two.  I think you will enjoy it.  It’s a guarantee you will enjoy it more than The Emoji Movie!