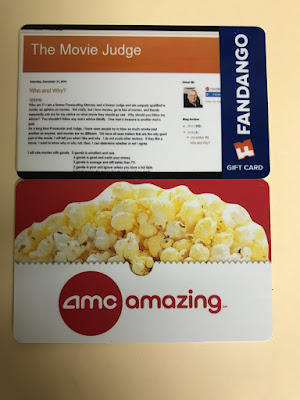 My sons and daughters-in-law definitely know what to get me for my birthday!  Under the category of something different, note that Fandango will allow you to personalize your gift card.  Imagine the possibilities.  For me, this was perfect but how great would this be with your grandkids’ picture on it? It would never get thrown out!

ICYMI–See TMJ’s latest review of Atomic Blonde.  Charlize Theron is one gifted thespian.  (Is there a pun in there somewhere?)

Edith Head.  Most of you have never heard of her.  She won the Oscar for Best Costume Design a record eight times. She had a total of 35 nominations.  Impressive!  What brings her name to mind? In recent years, we hear a lot about music, graphics, even makeup in movies.  Costume, not so much, unless its Star Wars or Lord of the Rings.  This summer, fashion has made a return in Atomic Blonde. Specifically, critics are referring to Charlize Theron as film’s best-dressed spy ever.  James Bond is out.  In addition to her deadly hand to hand combat, don’t forget to watch for her outfits, especially the red Dior stilettos.  And remember stiletto is also an Italian word for a dagger.

Now that July is about over, what’s up for August?

8/4/17  First up is Dark Tower.  The trailers look awesome but then it’s a Stephen King movie.  Idris Elba, Matthew McConaughey, and cute kid.  Best line of the year.  “Q. Do they have guns in your world? A. You’re gonna like Earth, a lot.”  Will I go see it?

And what about Detroit directed by Kathryn Bigelow (The Hurt Locker and Zero Dark Thirty) with a 100% Rotten Tomatoes rating thus far. Big number for civil unrest in the summer of 1967.

8/11/17  The Nut Job 2–did we need a second one?
Annabelle: Creation–we definitely didn’t need another one.  Maybe a good week to go on vacation.

8/19/17 Logan Lucky with Channing Tatum and Adam Driver planning to rob The CocaCola 600 race (yet another 100% Rotten Tomatoes rating though way early).

And who wouldn’t want to see Ryan Reynolds and Samuel L. Jackson in Hitman’s Bodyguard?  Do you think there will be some snarky comments flying back and forth?

Tulip Fever with Alicia Vikander, Christoph Waltz, Judi Dench, Cara Delevigne, and Dane DeHaan will take you back to 17th century Amsterdam. I am sure we will see the canals!

8/31/17  Leap, previously released in France, UK, and Canada as Ballerina and already grossed $57 million.  It’s a 3D computer animated musical comedy adventure film about a poor orphan girl who gets a chance to audition for the Paris Opera Ballet.  You will not be able to resist!