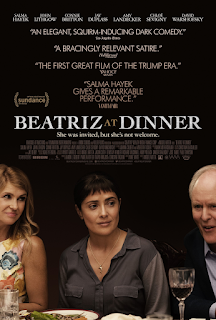 Political commentators constantly remind us that the East Coast and the West Coast have no idea what is going on in the flyover country.  Hollywood clearly falls into the West Coast category.  This movie is too simplistic; Latino female faith healer good, male corporate big shot bad. This movie is described as “when these two opposites meet at a dinner party, their worlds collide and neither will ever be the same.” Whoever wrote that obviously did not see the movie.  One would expect an exchange of thoughts and some movement to the middle; it didn’t happen.  And, it has an ending which will satisfy no one.

Salma Hayak (Beatriz) became friendly with Connie Britton (Kathy) at a cancer clinic treating Kathy’s daughter.  Beatriz continued massage treatments with Kathy and her husband, Grant (David Warshofsky).  When Beatriz’ car breaks down, Kathy invites her to dinner over Grant’s objections, knowing she would not “fit in.”  The guests (John Lithgow as Doug Strutt, Amy Landecker, his wife, Jay Duplass as the underhanded attorney, and Chloe Sevigny as his wife) arrive in splendid party garb, Beatriz in her jeans.  She is ignored in the introductions, so Strutt later mistakes her for a part of the help.  And this is all before they start to discuss land acquistions where birds may have to be relocated, and the killing of big game animals.

Apparently this is all supposed to be a reference to Trump and the evil he represents.  If so, why hide your politics.  If minorities can rightfully claim to be stereotyped by movies, is it fair to ask if corporations can be stereotyped?  This movie really comes off more as “the rich live (and, perhaps, think) differently than the rest of us.”  Surprise, surprise.  In conclusion, this “dinner conversation” adds very little to national conversation we should be having.

Salma Hayek is a fine actress but, given her strong feelings, she would have been better served with a little more fire in her belly.  John Lithgow has been playing the smarmy bad guy at least since Footloose (that’s the original 1984 Footloose for you young bucks).  For his character, a little more nuance and a lot more soul would have made him more interesting.  Disappointing is the only way to describe this effort; it should have been so much more.  To paraphrase Shakespeare, this movie hinted at sound and fury, it ends up signifying nothing.