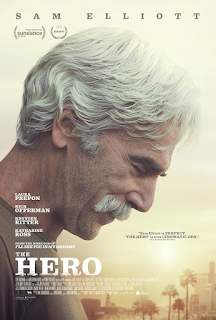 Gunsmoke, Bonanza, Rawhide, Maverick, The Rifleman, Wagon Train.  None had any actors better than Sam Elliott.  The face marked with years of sun on the prairie.  The signature cowboy mustache. The VOICE!   My early pick for best actor–Sam Elliott.

Lee is an old (70, make that 71) cowpoke actor whose best effort was 40 years ago.  Now, he can’t find work except for a few voice-over commercials.  To top it off, he finds out that he has pancreatic cancer.  His friend, and also his MJ dealer, Jeremy, introduces him to a much younger Charlotte.  Lee is skeptical of this May-December relationship, since she is much closer in age to his estranged daughter, Lucy.  Lee has no idea how to reconcile with Lucy; he has never been much of a father. This is not an action-packed thriller; it is slow-paced.  Yet, the director keeps you wondering what is going to happen next.  While The Beguiled is supposed to be simmering with sexual tension, Lee and Charlotte have much more sizzle.

Sam Elliott is Lee; the close-ups show just what a fine actor he is.  Laura Prepon (The Girl on the Train) is Charlotte, and matches Sam Elliott frame for frame.  Krysten Ritter (Jessica Jones, Big Eyes) plays Lucy and is underutilized.  Nick Offerman as Jeremy is a great character actor.  And it’s been a long time since we have seen Katharine Ross (Lee’s ex-wife) who you all saw in The Graduate (1967 with Dustin Hoffman)–well, maybe not you young gals!

A shout-out to Ms. Flottman’s movie group–this is the movie you definitely want to see.  Why do I go see these independent movies?  Because, once in a while, you find a gem.  For those of you who like movies but are not interested in travelling to Mariemont, start a list of movies you want to watch this winter.  It’s not a sequel; it’s not a comic book character; it’s not an intergalactic extravaganza. It’s just good acting with a good story.  And where else could you find a mix of Westerns and Edna St. Vincent Millay?