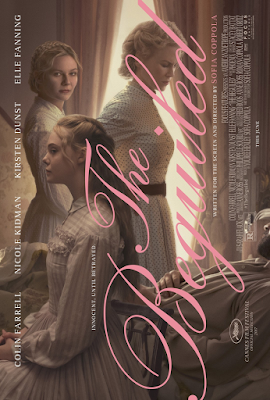 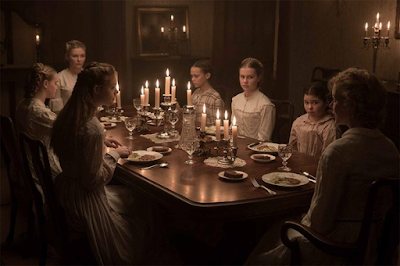 To beguile: to charm or enchant, sometimes in a deceptive way.  The cover of the book says this is a wildly entertaining novel of sexual tension and repression, and of rivalry, jealousy, and ultimately, vengeance.  Unfortunately, I think it is the viewers who have been deceived.

Three years into the Civil war, John, a Union soldier and badly injured, arrives at the Miss Martha Farnsworth Seminary for Young Ladies.  The ladies decide to patch him up and then send him on his way.  In the meantime, Martha, Edwina (a teacher) and Alicia (a student) all seem to fall for the Corporal. Eventually, John re-injures his leg and a decision must be made without his consent.  Are the women acting out of his best interest or is jealousy involved?

Given the limited 94 minutes of the movie, the director omits most of the back story of the characters.
It almost appears as if these ladies sit around and food magically appears; i.e., they had no lives before this good looking man shows up.  Now, all they can do is giggle and bat their eyes.  My God, there is a war going on, and times are tough in the South.  The critics have a justifiable complaint about the whitewashing the slaves out of this flick.  And, Edwina’s actions and motives can be viewed in an entirely different light when you know her real history.

The bottom line is that when you have a movie with the star power of Colin Farrell (John), Nicole Kidman (Martha), Kirsten Dunst (Edwina), and Elle Fanning (Alicia), but the movie is not shown in a major theater, it has some major problems.  To be honest, there is a complete lack of smoldering tension of any sort.  It appears that the director’s interpretation has fallen flat.  This movie was a bomb in 1971 (even with Clint Eastwood); it is not any better the second time around.  Some books apparently just don’t translate well to the screen.  Enjoy the long weekend and skip this clunker.