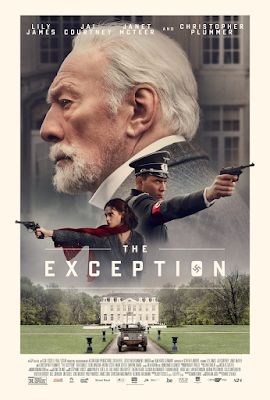 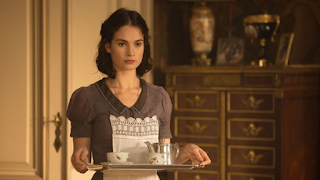 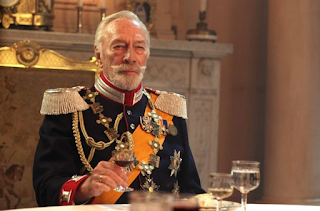 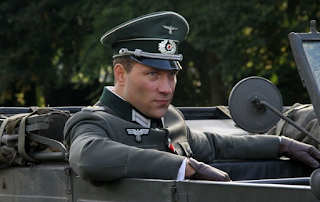 Captain: Does a soldier ever have a duty to something greater than his country?  Colonel: It depends if you even recognize your country anymore.  And so the difficult decisions that are made in wartime are visited once more in The Exception.  Is the Captain the exception to the evil Nazis, or is he just another in the lot?

This is a fictionalized picture of the Kaiser living in exile in Belgium at the start of World War II.  He and his wife are hopeful that Hitler will restore the monarchy in Germany.  The Captain is sent to protect (read that spy upon) the Kaiser, but falls in love with a Jewish housemaid who has her own agenda.  Himmler, duplicitous as ever, arrives and gives hint of The Final Solution to come.  The Kaiser, no fan of Jews, is appalled by the plan, even though the restoration is promised.

Christopher Plummer, as the Kaiser, is magnificent.  He solidly portrays a man who can be immoral, yet kind, at the same time.  Janet McTeer (recently of Divergent and Me Before You) is outstanding as the Kaiser’s manipulative but supportive wife.  But the movie belongs to Lily James (Cinderella and soon in Baby Driver) as Mieke, the maid, and Jai Courtney (Terminator Genisys and Suicide Squad) as the Captain.  The Captain first saw the killing of the Jews in Poland and beat the SS officer in charge.  Needless to say, most of the Nazis thought he should have been court-martialed.  Mieke’s father and brother were killed by the SS.  How will the Captain keep Mieke safe from Himmler?

This movie is well worth the drive through the orange barrels to The Esquire.  Himmler is as creepy and depraved as one could imagine.  Although the timeline is not always accurate, the story is based on enough facts to represent a realistic portrayal of events in 1940.  The plot twists keep it interesting, and who doesn’t like a good love story?  (Note:  There is some graphic nudity so if that offends,  you are forewarned.)  If you don’t feel like a drive, then add this one to your Netflix list.  You will enjoy it on a crisp fall evening.