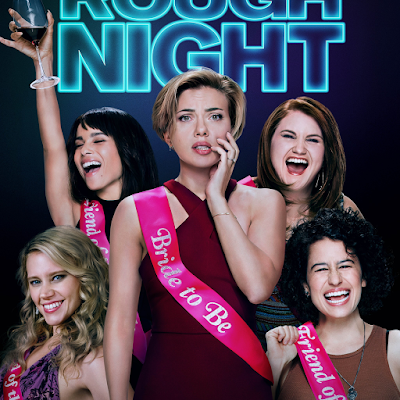 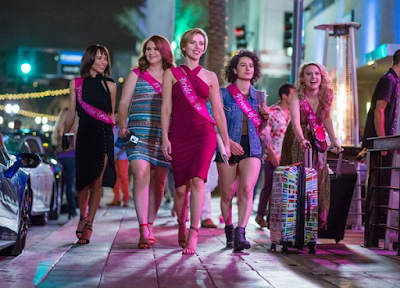 Remember when smoking was prevalent in the movies?  Barely, because Hollywood finally figured out that smoking was bad for you and realized that it should not be having its stars enjoying a smoke. So, why hasn’t Hollywood considered that maybe it’s not such a good idea to have five starlets thinking they must do cocaine to have “a good time?”  Do they not understand heroin crisis?  Is cocaine funnier than heroin?

Remaining on my soapbox, when this movie was being promoted, the directors were discussing a double standard about men in raunchy movies versus women in raunchy movies, i.e., men could say things and be funny but women could not.  First, did they watch Bridesmaids?  Second, body hygiene jokes may be funny the first time you hear them, but after years of the same material, it’s no longer amusing.  It makes no difference if it’s men or women!

Jess (Scarlett Johansson) is running for office but is taking a break with her friends for a bachelorette party in Miami.  Her best friend in college, Alice (Jillian Bell), a sexually frustrated female, organizes the event.  They are joined by Blair (Zoe Kravitz), the high society, soon to be divorced, girl from New York, and Frankie (Ilana Glazer), the twice convicted activist who apparently has no roots. Apparently Blair and Frankie had a thing for each other in the old days.  To round out the group, Jess studied for a while in Australia and met another close friend, Pippa (Kate McKinnon).  After drinking and drugs, a male stripper is procured and accidentally killed by Alice.  The rest of the movie has already been seen in Weekend at Bernie’s (1989) and its progeny.

Kate McKinnon can be a wonderful comedienne, but it was embarrassing for her to try to talk with an Australian accent.  What, they couldn’t find an Australian for the part?  I felt sorry for Peter (Paul W. Downs), the boyfriend, who is required to run around for half the movie in adult diapers.  Don’t ask. Finally, I remember when Demi Moore was a serious actress. The best part she can now get is a floozy next door?  Sad.

If you want to see the same, tired, overworked material, this is your movie.  There are very few laughs to be had.  With a budget of $20 million, it might make a profit by being sold to cable TV. Hopefully, we will not have to suffer through Rough Night 2.