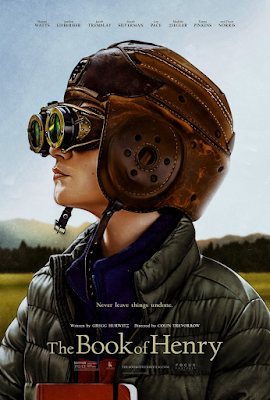 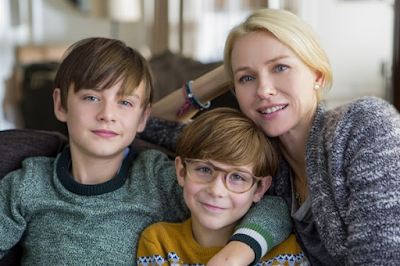 Likeable characters.  Nasty topic. Wholly preposterous plot.  “See the most original movie of the summer, with twists and turns you won’t see coming,” scream the ads!  Wrong!  You pretty much will see all the twists and turns coming.

Henry is an almost 12 year old genius who takes care of his mother and younger brother.  Even though she works as a waitress, he has invested her money “in a bull market.”  She doesn’t need to work.  Henry notices that the next door neighbor girl has suspicious school absences, bruises, and declining grades, all signs of child abuse.  The grownups won’t help her because the stepfather is the police commissioner.  Henry decides that he must save the girl but then he falls gravely ill.  He writes a journal, thus The Book of Henry, giving explicit instructions to his mother on how to deal with the stepfather.  While I will give some points to the writer for creativity, the plot is just not credible.

Naomi Watts as Henry’s sweet mother is credible until she is asked to do the unthinkable.  Jaeden Lieberher as Henry has that genius look.  No kid is any cuter than Jacob Tremblay as the younger brother Peter.  You will remember Jacob from the Oscar nominated Room with Bea Larson.  Maddie Ziegler, the girl next door, has a terrific dance scene.   If you have seen Halt and Catch Fire, it was good to see Lee Pace as Henry’s doctor.  Sarah Silverman, as mother’s best friend, is seen all too briefly.

Nothing special here folks.  There are lots of better movies out.  Given the actors and the cute kids, I was underwhelmed.  Save your money unless, well, I can’t think of much of a reason to see it. Granted, the advertising was good.  It’s a shame the movie didn’t follow suit.