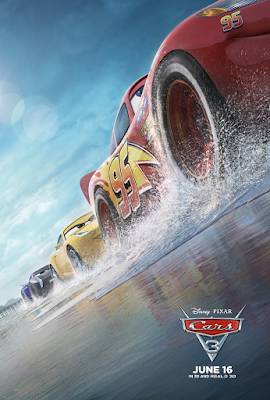 Apparently racing cars ask themselves the same question as humans, i.e., is it time to retire?  So you’ve had a few bad races, maybe you’ve lost a step or two. Still, you can out-work them, out-smart them?  Even if you are not a NASCAR fan, even if you are not a country music fan, I think Disney/Pixar has put enough in here for everyone.  And, to top it off, remember when we used to get cartoons before the main movie?  Pixar does, and has another hit with the short film called LOU. Very cute, even though no dialogue.

Not having seen Cars 2, I am picking up this franchise without some background.  Lightning McQueen (Owen Wilson) is back and beloved by his fans.  However, the next generation race cars, including Jackson Storm (Armie Hammer), are blowing by him.  His girlfriend, Sally Carrera (Bonnie Hunt), and his best friend Tow Mater (Larry the Cable Guy), believe he can still win.  Off McQueen goes to the new Rust-Eze Racing Center where he is to be trained by Cruz Ramirez (Cristela Alonzo but sounding an awful lot like Dory and Ellen DeGeneres).  As you might expect, teaching an old dog new tricks has lots of complications.

Admittedly, there is some repetition in this movie and some predictability, but everyone knows the good guy comes out ahead in a Disney movie.  The dialogue and the sheer number of characters keep your attention.  Think Tony Shalhoub, Kerry Washington, Chris Cooper, Nathan Fillion, Bob Costas, Cheech Marin, and John Ratzenberger, not to mention always entertaining Margo Martindale.