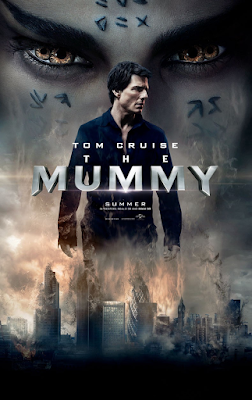 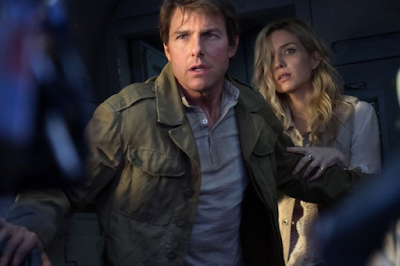 (Editor’s note:  I published an original version of this but it apparently got lost in the blog.  I have reproduced it as closely as I can.)

Hell hath no fury like a woman denied the right to be Queen.  Given my position not to rate these type movies, I will nevertheless comment.  The movie is Indiana Jones meets the Zombies and Jekyll/ Hyde, then meets The Phantom of the Opera.  To say it’s a convoluted mess is pretty accurate.
Apparently there is an effort to resurrect the old classics and someone thought Tom Cruise and Russell Crowe were the men to do it.  They were wrong.  It is fair to ask why go see this movie if I don’t like the genre.  Because I was hoping for a fun summer romp and it began that way with a Raiders of the Lost Ark beginning complete with spiders and rats.  Then it went south.

The movie is about Princess Ahmanet (played deliciously by Sofia Boutella) who is about to become Queen of Egypt until a son is born to her father.  Denied the right to become queen, she kills her family.  She is caught and buried alive for thousands of years until Nick Morton (Cruise) and his sidekick, Chris (Jake Johnson), antiquities thieves, release her.  She is not a happy camper and decides that Nick will be her Chosen One.  But, by that time, he only has eyes for Jennifer (Annabelle Wallis).  People, alive and dead, die and come to life again, rinse and repeat.  What does Russell Crowe do?  As near as I can determine, he is to complicate the plot and set himself up for the sequel.

Boutella, Johnson and, Wallis all do a fine job trying to carry the movie.  But, this is a a movie for the characters played by Cruise/Crowe and the plot fails them.

The most interesting Tom Cruise part was in the previews.  He has a movie to be released in September called American Made which is based on a true story revealed during the Iran-Contra affair.  Keep an eye on this one.

I admit that I have not seen any of the original Mummy movies.  So, if you liked them, perhaps you will like this version.  This movie cost $125 million to make; I am sure they are hoping for a big viewing from China.  I did think the sandstorms were cool.  Finally, how does Phantom of the Opera fit in?  Or, maybe it’s Beauty and the Beast?  You will just have to watch the end of the movie to find out.