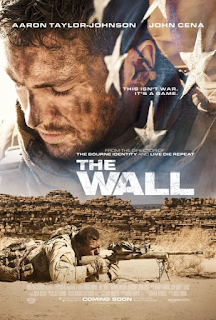 War is Hell!  Never underestimate your enemy. Soldiers die alone. The Wall is not much of a wall, but rather a few remaining stones left standing in the middle of a desert, providing limited protection from a sniper. Your buddy is shot and is down. You are wounded and unsure of the location of the sniper.  Your radio does not work properly. Pinned down, how do you survive?

With only two characters and not much in the way of props, this one hour twenty minute movie could easily be set as a play on Broadway.  Most of the dialogue is between the injured American and his never seen Iraqi sniper. It is billed as a psychological thriller and it delivers, although at times it drags as might be expected when the soldier has nowhere to go.  At one point, the sniper offers to let the soldier live if he walks away.  Can you trust the enemy?

Given that he is the only one on screen for nearly all the movie, Aaron Taylor-Johnson does a fine job maintaining the tension. He is the spotter for the American sniper played by John Cena of WWE fame. Cena fits the role nicely and is ready for bigger parts.  And, of course, the voice of the sniper is critical to this flick.  He is as manipulative as a hidden sniper should be.

Caution:  This is not a feel-good movie that you will snuggle up to watch with your significant other. At times, it is difficult to watch.  The unexpected will happen, not always in a good way.  Some critics refer to it as an anti-war movie, but when soldiers are dying, is any movie pro-war?  Given the type of movie, it is solid.

For those of you who await a review of Alien: Covenant, you will have to wait a long time!  This type of movie holds no interest for me and will not waste my time and money.  For those of you who like this genre, let me know what you think.  Rotten Tomatoes has it at 75%.