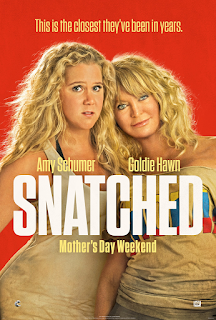 Sophomore jinx or fluke?  In sports, this question is often asked when a player follows up a good freshman season with lousy one.  In this case, Amy Schumer was pretty good in Trainwreck (85% Rotten Tomatoes with an assist from LeBron James).  Anyone who has seen her HBO specials knows that she has a tendency to go over-the-line potty mouth, but she was abnormally restrained in Trainwreck.  After grossing $140 million in that movie, the restraints were removed. Thus begat this unfunny comedy which should not have been made.

In Snatched, Amy’s character is dumped by her boyfriend on the eve of a trip to South America. Since she has nonrefundable tickets, and no one else will go with her, she takes her mother, played by Goldie Hawn.  The rest of the movie contains a series of sad caricatures of Hispanics including that they will kidnap and kill you.  Somehow, this was supposed to be humorous. but it is more offensive than funny.

The story goes that Amy saw Goldie on a plane trip and pitched this concept to her.  Goldie, who hasn’t been in movie since 2002, must have been quite desperate.  Surely she could have found a better vehicle for her comedic talents than this neurotic mother.  The parts for Wanda Sykes, Joan Cusack, and Christopher Meloni were downright embarrassing.

With a budget of only $42 million, my guess is this movie will be seen as a sophomore jinx and Amy will be given more chances.  Tina Fey and Amy Poehler have been able to make these type movies but without the more graphic anatomical references.  If Ms. Schumer doesn’t learn that this is not HBO, then Trainwreck will be viewed as a fluke.  Bottom line–just not funny; save your money!