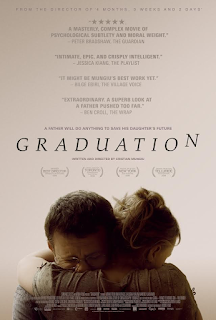 Mark Twain reportedly said that if he had to die he wanted to do it in Cincinnati because everything happens 10 years later there.  In at least partial proof that he was right, Graduation was the Romanian choice for the Cannes Film Festival in May 2016.  It arrived at the Esquire one year later.

Graduation portrays an unhappy Romanian family trying desperately to get their daughter out of the corrupt country and into Cambridge University.  But, on the eve of her final exams, she is attacked and breaks her right (writing) arm.  Her father, a physician who prides himself in doing the right thing (even though he is having an affair), decides that he must participate in the “system” in order to ensure his daughter’s success.  Once the downward spiral of doing bad things for good intentions starts, this is a great movie for exploring moral dilemmas.

However, if you want a movie to give you some answers, or at least guidance, the movie falls way short.  When you leave the theater, you will have more questions than when you entered.  For example, other than their unsuccessful return to Romania, the movie does not explore the failed relationship of the doctor and his wife.  Neither does it explore the relationship of the doctor and his paramour.  The movie raises questions about the attack but leaves it unresolved.

I have deliberately avoided mentioning the actors as they are Romanian and we are unlikely to see them (or remember them) in the near future.  My bias against open-ended scripts notwithstanding, the movie does a good job of showing life in Communist Romania.  It is easy to understand why the doctor wanted his child out of the country.  But, he forgets to take into account that his daughter may not want to leave.  And, of course, that is part of the conflict presented.

The 97% Rotten Tomatoes rating was a magnet to draw me to Cincinnati to see this film.  Graduation wasn’t that good, and only a die-hard will go see it.  If you like movies with questions and subtitles, have at it.  Once in a while you find an absolute gem in these foreign movies.  Sadly, this wasn’t it.