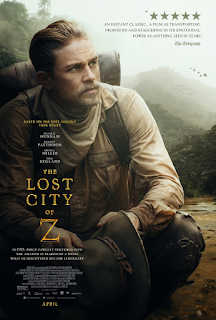 The Lost History of the Amazon.  Where in the World is Percy Fawcett?  Like the Amelia Earhart story, we are likely never to know the answer.  The movie hints at an answer but it appears that has largely been debunked.  How is it we know Indiana Jones but not Percy Fawcett?

We meet Percy in 1905 when he is in Ireland but chomping at the bit to get a promotion and restore the family name.  He thinks he needs battles, but the Royal Geographic Society convinces him that honor and fame may be won by surveying and mapping a disputed territory between Bolivia and Brazil.  During the difficult struggles through the dense jungle, Percy thinks he finds evidence of a lost city.  Upon his return, he is both hero and charlatan, but convinces financiers to back repeated expeditions, and newspapers to follow his journeys.  He became a rock star.

But was he legit as written in the book by David Gann, or a fraud as set forth in article by John Hemming written for The Spectator entitled “The Lost City of Z is a Very Long Way from a True Story–and I Should Know”?  The movie doesn’t explore matters that might ruin a good story.  And, it is a good story although at least 20 minutes too long.  Even Sir Arthur Conan Doyle (Sherlock Holmes author) apparently used some of Percy’s exploits for his novel The Lost World.

This is an interesting and thought provoking film although ultimately unsatisfying because you are left with lots of unanswered questions.  This will be a good movie to visit this summer when absolutely nothing is on regular TV (which may be too generous to assume that much is ever good on regular TV).  If you want to see it now, not many of the theaters are still showing it.  Unlike Percy Fawcett, I wish you better fortune in your hunt.