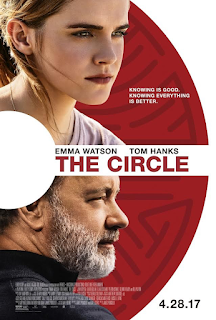 Creepy is the only way to describe The Circle.  Perhaps the book was better is the only nice thing to say about this movie.  It is certainly deserving of its Rotten Tomatoes rating.  What a colossal waste of time !!

The Circle is a perceived union of Google and Facebook type corporations which record everything we do. And, the answer to any bad thing that happens is still more transparency.   For example, cameras that record all we do will eliminate crime because people will know they are being watched. If you are injured, medical assistance will arrive immediately to care for you because you are watched.

The problem is that this movie might have been relevant at the time 1984 was written but it has nothing new to offer today.  It presents no new problems nor solutions.  This movie acts as if there would be little backlash to these totalitarian proposals.  Privacy seems to be an afterthought except for going to the bathroom and sex. It is a strange world these actors live in.

Emma Watson as the naive office worker and Tom Hanks as a Steve Jobs-like entrepreneur are fine actors but can’t make this script believable.  At least Patton Oswalt was cast properly as Hanks second-in-command as he definitely knows how to act creepy.

Bottom line is this is just a bad movie and not worth your money.  Annoying red message flags pop up all over the screen and you are never sure if you should be reading them or not. Drowning is apparently a metaphor for the endless sea of information out there. It only has a budget of $18 million and it looks like it.  Otherwise, it would drown in a sea of red ink.  I hope I got this review out before you were tempted to see Hanks and Watson.  I am surprised they got stuck in this clunker.