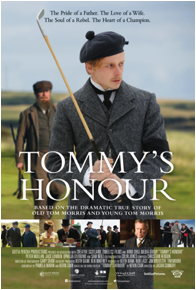 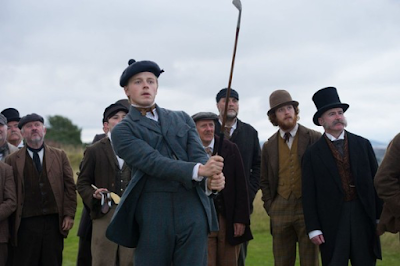 The Tiger Woods of the 19th Century was a Scotsman named Tommy Morris Jr.  According to a reporter, his name was known from London to Calcutta.  Not bad for a time without internet.  His father, Tom Morris, is known as the father of modern golf.  Besides being the greenskeeper at St. Andrews, he designed over 60 golf courses, including Muirfield.

Given the aforesaid introduction, one would think life was pretty easy for the Morris family.  But Tommy’s Honour is as much about class as it is about golf.  The aristocracy viewed the Morris family as the hired help and not fit to be called “gentlemen.”  By insisting on prize money, Tommy makes no friends with the upper class.  And, young Tommy is alienated from his parents when he decides to woo an older woman with a checkered past.

Jack Lowden as Tommy will soon be seen in Dunkirk.  You will remember Peter Mullan (Old Tom) from Braveheart, and more recently, in Harry Potter I and II.  Ophelia Lovibond was very good as Tommy’s wife.  Sam Neill is one of my all-time favorite actors and has a small part as one of the aristocrats.  An interesting tidbit is that the film was directed by Jason Connery.  Yes, he is the son of Sean Connery.

Unless you are a golf fanatic, it is doubtful that this history of golf will appeal to you.  The golf of the late 1800’s in Scotland looks nothing like the golf of today.  If you want a history lesson and a study of class division in Scotland with great scenery, then check this one out.  Caution: The Scottish brogue is again sometimes difficult to follow.  On the other hand, gas was only $2.28 at the Speedway in Mariemont.