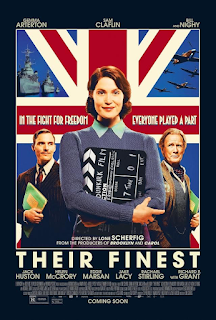 In 1940 England, Uncle Frank points out that old men and women are given opportunities because young men are dying over there.  He tells Catrin that it would be criminal to waste the opportunities given to them.  This is a wonderful British movie that hits all the boxes. War. Check.  Love triangle. Check.  Budding feminism. Check.  Cute twins.  Check.  Cute dog.  Check.  Banter between the lead characters.  Check.  Surprise.  Check.   Tear jerker.  Check.  Just like movies should be made.

Catrin is hired by the British Ministry of Information (propaganda) to help with the female point of view in a film about the British rescue at Dunkirk.  She is sent to interview two girls who reportedly were part of the rescue.  When she finds out that their story had been significantly embellished, she decides it is too good of a story to pass up.  After all, they must stir up the British passions for the war, and if they can drag along some reluctant Americans, so much the better.

Gemma Arterton stars sweetly as Catrin who lives with the mercurial artist Ellis played by Jack Huston.  We last saw Arterton receiving rave reviews in Gemma Bovery.  You should remember Huston in his role as Richard Harrow in Boardwalk Empire.  Sam Claflin, recently of The Hunger Games and Me Before You, is the third leg of the triangle as Catrin’s co-writer Tom.  Jake Lacy is the “dumb” American needed to grab the American audience.  He was recently seen in the Cincinnati-filmed Carol.  Of course, Catrin and Tom have to script out what an American is doing at Dunkirk. As usual, the scene stealer is Bill Nighy.  In a character reminiscent of his role as rock star Billy Mack in Love Actually, no one plays a conceited ass better than Bill Nighy.  And, he is still loveable.

For us Americans, I guarantee you will miss some of the dialogue because of the heavier British accents.  (When it comes to TV, you can always turn on the close-captions.)  But that is slight price to pay for an entertaining movie.  Besides, Mariemont is nice this time of year and the popcorn is top-notch.  Take your significant other on a road trip.  This is a nice find.