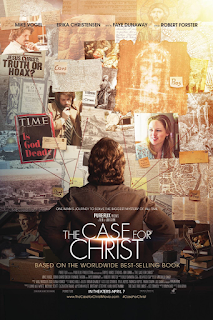 “One man’s journey from skepticism to faith” is how the main character describes this story. Actually the journey was much longer. He was a full-fledged disbeliever, not merely a skeptic.  Whatever your belief about Christianity, it is an embarrassment that so few so-called critics reviewed this movie. While I could not ascertain exactly how many reviewers are approved by Rotten Tomatoes (I assume hundreds), the website I use has less than 20 reviews. This film is based on a true story and it deserved better than to be ignored.

The Case for Christ opens as a Chicago Tribune investigative reporter is receiving accolades for his work. To celebrate, he takes his pregnant wife and child to dinner.  The child is saved from choking by a nurse who said she was going to go to another restaurant but something told her to eat there. As one might expect, this is a life-altering event for Mom who now turns to religion.  Since this was a previously comfortable atheistic couple, Dad freaks out to the extent that, at one point, he considers ending his marriage.

In an effort to convince his wife that her faith is flawed, the reporter decides to disprove the Resurrection which will allegedly cause the basis for Christianity to “tumble down like a house of cards.”  Much of the movie is also a case study in how a family must adapt as parties grow and change during the course of of a marriage.

The weak part of the movie was the selection of Mike Vogel as Lee Strobel.  While one doesn’t expect an A-list actor in a $3 million budget movie, his transformation from raging atheist to a sudden believer was unconvincing.  On the other hand, Erika Christensen, as his wife, and L. Scott Caldwell, as the nurse, were quite believable.  Faye Dunaway and Robert Forster, both fine actors, were barely seen on screen.  (Forster played Strobel’s father and the estrangement between the two was not developed at all.)

Perhaps the most memorable quote from the movie is by Strobel’s co-worker.  He says “while it takes faith to believe in Christianity, it also takes faith not to believe.”  While this movie is not likely to change many beliefs, believers and non-believers should enjoy the “journey.”  The production is much better than a Lifetime movie.  The book upon which this movie is based sold 14 million copies. Having grossed just over $8 million, I suspect the producers are disappointed in the turnout thus far.