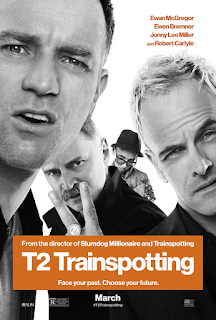 For those who haven’t seen the original, “trainspotting”  means “shooting up.”  If you haven’t seen T1, then I recommend you only see T2 if you are shooting up. Otherwise, it will make no sense. Seriously, who thought it would be a good idea to make a movie about “dopers grow up.”  Or, in this case, didn’t grow up.

T2 begins 20 years after T1. At the end of T1, Ewan McGregor stole 16000 pounds from his 3 cohorts after they completed a large drug deal.  He now returns to make amends to find his friends in various states of despair and seeking revenge.  Beyond that, the plot is a convoluted mess.

If you have seen any British movies in recent years, there is a good chance you have seen McGregor’s co-stars.  Ewen Bremner, Jonny Lee Miller and Robert Carlyle are terrific actors and are fascinating to watch.  It is a shame that they didn’t have a better script.  Hopefully they got a BIG payday.

Apparently T1 was somewhat of a cult hit in 1996.  If you want to see T2, then go back and see T1 first. Still, this movie seems designed for a very limited audience.  With a budget of only $18 million, perhaps it was a safe investment because of the status of T1.  I would be shocked if there was a T3.  If memory serves me correct, this is my first 1 Gavel.  I debated 0 gavels but how can you go lower than “this movie should not have been made?”

FYI–The Fate of the Furious car is already gone from the AMC Theater.  Didn’t last long!